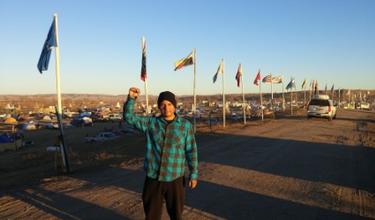 Despite these challenges to Native Nations there have been a few items of hope. For even the perceived worst of presidential administrations seems to pass some legislation during their tenure that is beneficial to their political opponents. For example, Savanna’s Act (signed into law in 2020) requires the Justice Department to develop more detailed guidelines for
responding to and documenting cases of missing and murdered Native Americans, the rate of which is one of the highest among any demographic in the U.S., especially among Native American women. Additional legislation that benefits Native American populations is the Not Invisible Act (signed into law in 2020), which was the first federal bill to be introduced by four enrolled members of federally recognized tribes: Representatives Deb Haaland (D-New Mexico), Tom Cole (R-Oklahoma), Sharice Davids (D-Kansas), and Markwayne Mullin (R-Oklahoma). This companion bill pushes the federal government to increase its response to missing and murdered Indigenous women (MMIW), as well as establishes an advisory panel composed of law enforcement, tribal leaders, service providers and survivors focused on violent crime against Indigenous women. Both pieces of legislation will hopefully provide hope in reducing the amount MMIW cases among future generations of Native Americans.

Despite a few grains of hope, it’s been time for a change in the White House. And one could argue that nobody mobilized and galvanized American citizens to vote against Donald Trump than Trump himself. His long line of confusing and perplexing rhetoric and policies may have gained a substantial amount of support, but also motivated a greater number of citizens to vote him out of office. The country showed that despite his massive following and support, the majority of Americans were ready for a new president, and president-elect Joe Biden’s administration may offer healing in that regard, especially for Native Nations. After winning the election, the President-Elect proceeded to nominate Deb Haaland as Secretary of the Interior, making her the first Native American as the head of the Department of the Interior. This is important to Native Nations because she would oversee agencies such as the Bureau of Indian Affairs (BIA) who have enormous influence on Native American tribes. The new president also is making the fight against the ongoing COVID-19 pandemic and rollout of vaccinations among his top priorities, which is welcome news among so many Native American tribes that have been afflicted by the virus. And there is even rumor that the Biden administration will sign an Executive Order that will halt, and possibly lead to the discontinued use of, the Dakota Access Pipeline. But most of all the new president may offer a calming sense of leadership that this country, and Native Nations, sorely needs. After such a devastating year, and a tumultuous four years of leadership, it is indeed a time for healing.

A Year of Healing

It was a cold November night next to the sacred river at Standing Rock, ND. Where thousands of people from across the nation and globe congregated to protest the installation of the Dakota Access Pipeline across Rosebud Sioux ancestral lands. By that point in time the protest had been months old and the fervor around its origins and life had started reaching greater national media attention. People were especially huddled and grouped up at what was affectionately named “Facebook Hill”, due to it being the only area in the whole encampment where one could receive cell and internet service. Whether this was due to the remoteness of the area or law enforcement funneling everyone’s signal to one location to better monitor cellular and internet traffic is anyone’s guess. However, the increased security and presence of militaristic law enforcement was palpable, and perhaps a harbinger of the next four years to come. It was also the night Donald J. Trump was elected president of the United States. And it seemed the election foretold pending battles that were to be waged for Indigenous rights and sovereignty in the years to come. However, nobody could have foretold how the 45th president’s term would end, and how it would test Native Nations’ resolve, as well as that of the entire country.

Unless you’ve been living under a rock, there has been a lot of notorious events that have occurred over the past four years of the Trump presidency. And while he has represented many of the traits that liberals and activists despise – advocating for the construction of the border wall, pulling the United States out of the Paris Climate Agreement, and his general antagonistic rhetoric that seems to divide the country more than unite it – one could say that he did exactly what he said he was going to do and what many came to expect of him. Including the signing of an Executive Order to complete construction of the Dakota Access Pipeline after it had been halted by the previous administration.

Other notable acts by the Trump presidency that have negatively affected Native Americans include the rapid construction of the U.S./Mexico border wall that has desecrated sacred sites of the Tohono O’odham Nation, and of which has ignored federal guidelines and assessments to prevent such destruction. His administration also decreased the size of federal monuments and national parks designated by previous administrations under the Antiquities Act, including Bears Ears National Monument. The shrinking of national monuments includes loss of federal protections of sacred sites within those areas, and in the case of Bears Ears, it included loss of protection of sacred sites for several tribes of the Four Corners region. Lastly, it goes without saying that the COVID-19 pandemic has wreaked havoc among Native American tribes in the form of high infection and high death rates. While many systemic challenges in the health care system for Native Americans carry much of the blame, one could argue the rhetoric by the Trump administration – that seems to cut through the country like a knife – has come at the worst possible time. Instead of uniting citizens to try and halt the spread of the COVID-19 virus, the president has only accentuated the difficulties surrounding that effort through his brazen speeches and then nonchalant attitude towards the severity of the virus on the U.S. This has indelibly affected many demographics, including Native American tribes, who continue to die from the virus at an extremely high rate.