Friday afternoons at the band shell in Memorial Park

on the flood plain of Mniluzahan (Rapid Creek),

people begin gathering around 2:30 in anticipation

"The Feed" happens every week for the unsheltered

On a particularly chilly and windy afternoon in

November, I had an opportunity to witness the love shared by the Good-hearted People as they care for a large segment of the City's population in a multitude of ways.

About 4:30, Tom's SUV arrived, and people helped unload supplies for the meal, donated coats and other winter gear, and various personal necessities for guests.

A trio of women sat together on the end of the raised platform. They seemed engrossed in consoling each other and commiserating. A woman in a blue van spoke to me. I asked her if she was waiting for Lloyd. Smiles, nods, and compliments for my earrings. I told her how one of the migrating Canada Geese resting on the nearby pond had left a green deposit on my windshield as they flew over me, wings a-flutter. We shared a chuckle. She later joyfully acquired a long down coat from the Giveaway.

Lloyd arrived, and I re-introduced myself to him. Suddenly, a verbal summons ordered me to join the trio of women!  I approached and the Elder took my right hand between her two gloved hands and held it gently for several moments. She told me her name was Sophia and spelled it for me.

"I been on the street since 1989," she said, pointing to her right, "and this is my shopping cart." It was packed to the brim. Her two companions were sharing a smothered giant burrito. She introduced them as Candace and Heather. ( Since 1989!!! Thirty-two years!!!)

Just before 5:00, a truck from Sage Creek Grill

pans of homemade chili and chilled bowls of

service, and clean-up is donated. Tom and Deb

are the logistical  team for the grassroots

organization that mobilizes via social media.

Other donors for this meal: Fork Real of

Lloyd walked among the people with a sage smudge. After the food had been unloaded, a circle formed and prayers of thankfulness and blessings were offered

Enticing aromas of chili filled the air. People formed an orderly line along the extended serving table and waited happily to be served by Tom, Deb, Michael, and Carol. There was much banter back and forth. At one point, verbal fisticuffs arose between two young women over items in the Giveaway. They were open, though not mean, in the presence of family and friends, and no one intervened. Meanwhile, the band shell and surrounding area filled with people quietly enjoying the comfort of a meal cooked, provided, and served with Love. Those who wanted to take food with them (wateca) were given generous servings with blessings.

Later, another argument arose: this time between a man and a woman. As the level of screeching and invective rose, a voice came out of the band shell: "Shut the F_ up!" Sophia had spoken!! I turned to Tom and asked if Sophia was queen bee. He replied that she is!! No one got in her face or disrespected her. She is an elder, has years of learning and wisdom, and they honor her.

As twilight fell, so did the temperature and these old bones complained. I was thankful to be able to return to my vehicle and ponder what I had just witnessed as I drove sixty miles home to my warm apartment. The people I saw wore extra-large items of clothing so they could don several layers against the cold. Someone had donated hand-crafted hats for the Giveaway. Personal care items are prized. Socks and gloves... How absolutely kind, friendly, and considerate everyone was...Excellent vibe there on the banks of MniLuzahan!

The homeless community set up a camp at the fair grounds along MniLuzahan earlier in 2021, but pressure forced them to leave the City limits. Lloyd was instrumental in setting up The Encampment on Lakota holdings in the Black Hills, where they moved for the summer. Camp MniLuzahan has closed for the winter, but there are hopes and visions of tiny houses being built there in the future. These kind of dreams require funding, however.

The Creek Patrol is made up of individuals who travel along the banks of MniLuzahan, looking for people needing assistance. Many people are found frozen along the waterway during the winter. The Creek Patrol carries jackets, hats, gloves, water, and other items to aid those in need.

A footnote: As I write this, the Mayor of Rapid City is pushing back against the OyateKin ChanteWastepi for their good works. 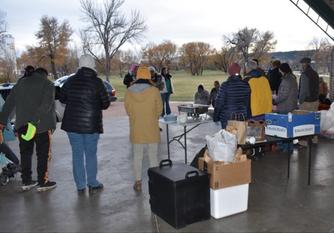 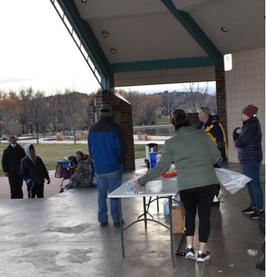