Heart serves as a Native Nation Rebuilder for the Native Governance Center, financed through the Bush Foundation.

Heart believes running for office and for leadership positions, in addition to voting, should be the new norm for Native Americans. “We're the original inhabitants of this land, so we should also have a say in what goes on to shape the future of our community.”

Relative to the local economy, she continued, “Our population makes up at least a fourth of the city, and every year we bring in so much revenue due to the events that go on, like the Black Hills Powwow and Lakota Nation Invitational. You know, there are all these surrounding reservations that do their shopping in Rapid City. It's been home to us forever. Our representation on city council needs to reflect our population.”​

“The most important ongoing effort I've been a part of is being a leader in helping with the Native vote. Recently, I've been accepted into the Transatlantic Inclusion Leaders program, which is an international program that brings together diverse young leaders to collaborate on business and civil society policies from a global perspective. All of the opportunities I have been granted, I am thankful for and will continue to help in any way I can for the community I love,” Heart said.

She also spoke out against an anti-panhandling ordinance in Rapid City, directed at street people, many of whom are Native. She told the City Council last year that they did not have the best interests of their residents at heart.

“I want you to know that Indigenous people on these streets are not homeless people; they are houseless people. These are their homelands. ...this ordinance and how you are going about it is not the way to end homelessness. These people are in crisis, and I think they need resources. They need help!” she said.

“Only together will we fulfill the ideals of dignity, integrity, wellness, and prosperity for all!”

Dignity is strong in her spirit. She served as one of the models for Dale Lamphere's magnificent “Dignity” sculpture that stands high above the Missouri River along I-90 near Chamberlain, South Dakota. It is the fire that urges Heart to manage Missing and Murdered Indigenous Women (and relatives) He Sapa and to serve on the board of He Sapa Otipi: a Native center at the Heart of Everything that Is. She also serves on the board of the “Dignity” Initiative.

In her bio on the South Dakota Democratic Party web site, she is described as having “served her local community and demonstrated a track record of consistent and reliable leadership. Cante believes that it is important to uplift Indigenous voices in all capacities. She also believes that it is up to us to create new relationships and bridge the gap to strengthen current relations. Cante looks forward to bringing a Lakota perspective to the party by building relationships through shared values with a collaborative approach.”

Several years ago, Whisper and Thunder readers were introduced to Cante` (pronounced “Chuntay”) Heart in the pages of this publication. In the intervening years, she has become a mother, graduated college, and has run for political office.

Heart, a member of Rosebud Sioux (Sicangu Lakota) Tribe, also has Ihanktowan (Yankton), Cheyenne River Sioux, and Winnebago Ho-Chunk heritage. She is daughter of the late Carole Anne Heart and Travis Harden. Her mother served as executive director of Great Plains Tribal Chairmen's Health Board, president of National Indian Education Association, and as senior advisor to Director of Indian Health Services in Maryland.

Referencing her upbringing, Heart said, “I was raised by a strong Lakota woman. She taught me to always try to help my people in any kind of way possible. Even though I didn't grow up on a reservation, I was always thinking of ways I could do this. Early on, I was instilled with Lakota values.”

The mother of three girls--two of which are twins--is raising her children in Rapid City.

“We are blessed to live in the Black Hills, one of the most beautiful and sacred places on Earth,” she said.

Heart and her girls participate in traditional Jingle Dress Dancing, often to the beat of Travis Harden's drum. In that context, she is teaching aspects of her culture to her daughters and to those who attend her public performances.

“Being a mother,” said Heart, “has been the most significant position I hold.”

In December 2019, Heart graduated Oglala Lakota College as a Bachelor of Science in Business Administration.

“I chose the business field because I wanted to help increase economic mobility in my community and help my community grow. Economic and workforce development is an area that is so tightly woven into the fabric of prosperity for all. I believe with conscientious choices, strategic plans, and opportunities matching educational needs with local businesses' ideas, that communities can be uplifted through economic and business growth together.”

She has done work for and gained experience with NDN Collective, Oglala Sioux Tribe, Lakota People's Law Project, and is currently serving as Native Outreach Field Director for the South Dakota Democratic Party.

As an offshoot of her prodigious activism, Heart recently, along with an unprecedented four other Native women seeking municipal office, ran for the District 5 seat on the Rapid City Council. She feels there is a dismal lack of communication between the community and those that represent them.

“A lot of citizens of Rapid City aren't heard and represented in the future of our community.” She sought to bring a fresh perspective and to build relationships within the City to the benefit of all.

“I've always wanted to run for public office. I grew up watching my mother be a voice and advocate for this community, as well as Indian Country, so it is in my heart to do the same. Successful candidates such as Kevin Killer, Peri Pourier, Red Dawn Foster, and, of course, Congresswomen Sharice Davids and Deb Haaland, have been an inspiration for all Indigenous people to hold public office positions.”

“I wanted to inspire my community to get involved as far as voting, as far as stepping up into leadership positions. And I felt that if the younger generation could see a familiar face, or, you know, could identify with me, then it'd inspire them to get involved, too. So basically, I'm doing it for the up-and-coming leaders who need to be recognized and need to be taken seriously, too.” 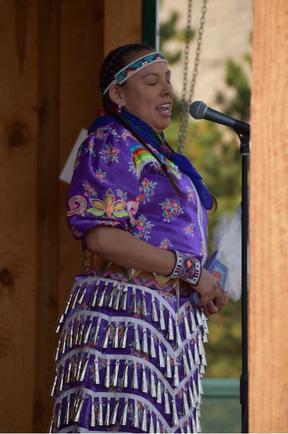