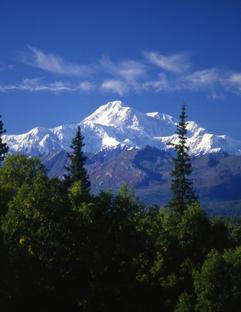 Climate Change in Alaska and the Arctic
~ Carol Dixon

We hear in the news on a weekly, if not

daily, basis about climate change. The

effects it's having all over the country

and the world are profound, and are

beginning to escalate. The time we have

to take dramatic action to help us adapt

and save the life on this planet is

decreasing rapidly. Too many people,

especially in the United States, are still

in denial. The willful ignorance born out of a desire not to give up anything we're enjoying as a way of life and the often hidden fear of facing something as overwhelming as global climate change must be put aside if we are to face this challenge in a meaningful way.

The Arctic regions are showing the effects of climate change at a much more rapid pace than other areas of the globe. Even though every winter the lower 48 states are getting hit by severe and unusual snow storms and weather, and in the other seasons by floods and hurricanes at a much stronger and more rapid rate, the Arctic is showing even more dramatic changes.

Researchers in Alaska have pooled efforts with those in Canada and other Arctic countries to document the changes taking place and the impact they will have on the rest of the country and the world. Weather stations are sparse in the Arctic, so they are using historical data that has been recorded, combined with passed down historical information from local people who have lived in the areas for long periods of time and are familiar with the patterns of the climate in the areas where they live. There is also, obviously, scientific data that is documented constantly.

The profound effect of climate change in the Arctic and sub-Arctic is called the “albedo effect”. As warming causes increasing loss of reflective ice (glaciers and ice packs melting), more heat absorbing dark ground and water are exposed. This makes temperatures even warmer, causing more melting of the reflective ice..and the cycle continues and picks up the pace as it does.

The effects in Alaska are not only physical, but economical as well. Alaska is one fifth the size of the continental United States. It includes tundra where the ground is permanently frozen (permafrost) and huge stretches of boreal forest which has birch, spruce, aspen, alder and willow trees. In the south central and south east of Alaska there are huge spruce trees and milder (maritime influenced) climate in general. The Aleutians and western coastal areas are often barren and windy, with trees as you go southward and tundra in the northern coast. Hundreds of small communities throughout the state are not on a road system. They are accessible only by air, ocean, and winter trails. These communities mostly maintain a subsistence lifestyle and depend on hunting, fishing and gathering to support themselves.

Ironically, the state's largest source of income is oil and gas extraction. This is also a primary cause of climate change. This makes it very difficult for the state to plan for adapting and preventing the escalation of climate change. It will require at some point soon some very strong adaptation on the part of Alaskan residents. Of course that means those who depend on the modern conveniences, but also those whose lifestyle is primarily subsistence. Alaska has 6640 miles of coastline and is largely a sea dependent state. Because of loss of sea ice many of the coastal regions are losing land to the ocean through erosion. This is especially true in the Bering Sea area at this time. The island village of Shishmaref, a village of about 500 people off the coast of the Seward Peninsula north of Nome, is eroding so badly that houses are falling into the ocean. I lived there in the mid 1970s and know where some of those houses were located. At that time erosion had already begun, but those houses were not in danger. The island has been their home for hundreds of years, and now they are looking at the pretty much undeniable need to relocate to the mainland. Unfortunately, that is a very expensive undertaking. The village is still trying to find ways to fund their relocation. The village of Kivalina farther north on the coast is also suffering from similar problems, but they are not on an island.

Coastal people who live a traditional subsistence lifestyle depend heavily on hunting. Walruses, seals, and polar bears are no longer finding the ice they need to move back and forth and to rest, hunt, mate, and breed. This threatens the species mentioned, but also those who depend on those animals for food.

It's not just the coastal regions. Inland residents depend on salmon as an important part of their diet. Because the salmon they catch in the rivers fatten up in the ocean before their migration upstream, changes in the ocean will affect the salmon as well. If/when climate change causes the ocean to be too acidic, the tiny snails on which the salmon feed would not be able to form their shells and would be at risk. This would put the salmon at risk. Everything is connected.

Forest fires are a regular occurrence in Alaska. Most are caused by nature, specifically lightning. But some are caused by humans, as is the case all over. In nature, fires clean out brush and built up dead vegetation and make room for new vegetation. In the interior of Alaska, where most of the fires occur, in recent years the fires are burning hotter. Warmer, drier spring weather is enabling the fires to burn uninhibited and destroy millions more acres than has happened previously. Neighborhoods have been evacuated and fires are threatening populated areas more. Smoke is often dispersing all over the state. These fires are not only a danger for obvious reasons, but they also accelerate permafrost thawing. Roads are buckling and cracking up, sometimes even looking like a small earthquake broke them up. This is due to the frozen ground that formed their foundation, now melting. This also threatens airport runways and bridges. In the interior, seeing homes that are tilted and sinking is becoming more common. As these organic permafrost soils thaw they start to decay and put more carbon into the atmosphere, which is particularly potent in the form of methane bubbling from lakes.

In the urban areas, where over half the population lives, the economic effect isn't as dramatic as in the rural areas where subsistence is a lifestyle and a survival issue. However, many Alaskan urban dwellers regularly hunt and fish as part of their diet as well. They also enjoy winter recreational activities, and the reduced amount of snow in recent years is taking its toll on skiing and dog mushing and tourism.

In Southeast Alaska (the panhandle) mountains are losing their snow caps earlier and gaining them later. Water is flowing downstream out of season, which can impact salmon as well as hydroelectric power production. The huge yellow cedar trees are dying because of lack of adequate snow cover to protect their roots.

Many of the things mentioned are happening all over. However, these effects are occurring faster and more comprehensively in the Arctic and sub-Arctic regions. This area is the predictor of what is to come for the rest of the world. Alaska and other Arctic regions are working on plans for action to mitigate these effects. And it has to happen quickly. Some scientists say we only have 12 or so years to make major change or it will be too late. Alaska is working with Federal agencies like the Forest Service, National Park Service, Bureau of Land Management, and Department of Defense.

Change won't be easy. But it must happen quickly and people need to understand the undeniable necessity of adapting in order for their own survival and the survival of life as we know it on this planet we call home. There is no more room for denial. No more room for “We're having snow in the mid west so there can't be global warming” talk. No more room to wait for someone else do “do something”. No more room for profit and greed to be more important than doing what's right to save what we haven't already destroyed. We can ignore it and put it off, and talk about it at our own peril. If we don't take action we will not have a second chance. We need to each take individual responsibility. That means voting for people who are committed to taking immediate action. That means making changes in our own lives that may be uncomfortable but that will be our own little ripple in the big wave of change that needs to happen. That means supporting efforts in any way we are able that help mitigate the damage being done and slow down the changes that are happening. That means being willing to work together, to realize and know that we are all in this together, that all life is one and all things are connected. We must all bear the burden of this responsibility...and if we all do this together, we can and will make a difference.