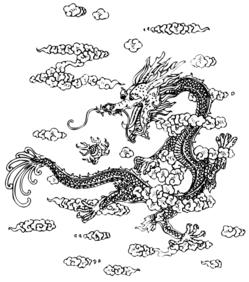 Destiny of the Enix

It was near dusk and the old Wizard's Tower halls were silent.

Nothing in the empty darkness stirred. The air held a dead calm.

Then something tensed in the shadows. A hooded figure

the steps, he arrived quietly to the top-most floor. Approaching

a pair of elaborate designed double-doors to the main room, he

took a few moments to investigate the finely crafted woodwork

that possessed the entrance to the Master's chambers. A place of importance to this trespasser.

A dragon was carved on each 8-foot tall, oak entryway. Both creatures were side-standing and facing each other. Claws raised toward the middle, the dragons seemed frozen in an attack bearing. The heavy doors were varnished a glossy auburn and lined with a decorative gold border. Ruby gemstone filled the eyes of the serpents and glistened in the faint light. The craftsmanship was impressive as he stared with his ability of Darkvision. A type of vision that can be described as being able to see as though there were some light, even in total darkness, to a short distance. An ability that works well in a rogue profession. The cloaked figure took note and appreciated the work. But, admiring wood sculpture was a low priority on his list of goals.

Moving close to the keyhole, he summoned a set of picking tools from under his dark cloak and began solving the lock. A short amount of time passed, when a damp clicking sound notified him of success.

With a quick smile, the intruder slipped through the threshold, closing the door behind him, without a sound.
All was suppressed under a thick coat of darkness, as his green-eyes, cautiously, scanned the spacious area. It was a cluttered room. Many bookshelves, tables with colored containers, various sized cages with small, furry, animals scattered the space. Plants of different species, tall and small, littered wherever there was enough room on flat structures. Small machines, some working, others silent, were arranged in no particular order around the territory. Some Aquariums were inset in a few bookcases. Where the ground could be seen, it was carpeted with old, thick, red rug. In the center of the tower's chamber was 10-foot round, marble flooring. There was a palpable amount of dust in the air.

Although, some of the items were curious and begged of interest, the shrouded male remained focused on his one and only objective. So he quickly and gracefully, maneuvered in a wide arc to the grand desk in the back of the room, not disturbing the animals.

Carefully searching for anything that could resemble a hidden switch amongst the drawers, he noticed something peculiar on the lower end of the desk. A safe sat tucked inside an open drawer. The sight set the hairs on his neck ridged. As the safe, which seemingly should be covered and closed, was exposed and open. This had to be the place his Mark would have been. Looking around the room, the thief's blood ran cold.

"This was too easy." He thought anxiously.

Was he double-crossed by his employer? What would be the end-game of his unmasking? He was certain he covered his tracks well. He had excellent senses and knew his trip to the tower was clean.

Opening the safe and peering in, his stomach turned in on itself as it was empty. Panic rose in him, and he stood up, facing the rest of the calm room.

Just beyond the white marble flooring, there was a petite humanoid figure outlined in the dim light.
The rogues eyes widened.

"This person had eyes on me the entire time!? How did I miss this!?" He fumed to himself.

Although he didn't show it, his body was quaking with tension. He had been found out and it meant two things, fight or flight.

Even with his capability to see in the dark, he couldn't make out any details of the dark silhouette.
Something was off though. Strange that he was watched, yet there was no alarm. Maybe, this person is just keeping an eye on me as the residents were alerted and on their way home.

The male had to do something to take control of the situation as best as he could. His livelihood, more than likely, was on the line. He began an approach to the silent being. It spoke just before he reached the edge of the pale marble.

"Hello, sir." The youthful, female voice echoed in the room.

Stopping and scrutinizing the voice, he could notice subtle nuances in her pitch, tone and speaking style. She was nervous. Although she was female, he questioned whether she was human. He had a lot of experience with elves, as he was an elf. There was something else from her sound that rang different that he could not pin-down, as of now.

With the help of his Darkvision, he observed she was not wearing typical garb of a magic-user. Actually, he could make out she was in clothing of a woodland creature. Temperate forest region he concluded to himself.
"Why would a forest dweller occupy a Mage's Tower?" He wondered.

One thing the elven young male had decided on, was the slender female was a magic-user. Maybe, that was the connection.

"Magic-user." He thought with distain.

She moved closer to the marble, and had a yellow dress with revealed, narrow, shoulders. Sun-colored shoes, and matching wrists covers. Her hair, blonde roots and almost orange at the tips was twisted up, like ice cream and pointed back towards the sky at an angle. Glitter covered her hairline and she wore sparkly yellow earrings. Even her finger nails and lips shown a sunflower color.

She was about 4 foot and thin, with a doe-eyed look. Her ears were long and pointed. Far more exaggerated then average elven. She was of feyfolk descent.

"Do you reside here?" He asked curtly. His hand nearing his short blade, from under his cloak.

Her eyes glanced to the side and she smiled as she answered, "No."

This reaction brought about some confusion on the young elf's part.

"And I know you do not reside here as well, sir." She said in her soft voice.

"What is your game then?" He queried.

"Um, perhaps I may ask you a favor, Master Thief?" She joyfully pleaded.

As a skilled rogue, he had been exposed on a job and still hadn't found his bounty. The light-footed elf was no longer in a mood for this confrontation.

"I will not. My time is done here. Do not follow or conspire on me, young lady. I am exercising tolerance for our encounter."

He began to move, when the fey girl revealed an item from a small, draw-string purse.

"Your trade is Thief." She pointed out.

The details of the item were difficult to see from his distance, but he started to understand what the object was.
She smiled timidly, baring white teeth, "I found this in that Iron Box."

"How did you open it?" He questioned.

"I watched that Master spell caster turn the numbered wheel." She said, curling her smile on one side.
"And he let you?" The cloaked figure asked in disbelief.

"He was unaware of my presence." She said covering her mouth, coyly, the rogue heard her laugh a bit through her tiny hand.

Narrowing his eyes, he mockingly smiled in return. Magic-Users.

Kneeling down, the young feylike female slid a small onyx-colored bone flute, carved from a long dead, powerful, black dragon, to the center of the marble floor.

Nethergrim Reprieve. A magical flute, if played by someone with enough spiritual power, or mana, as spell casters say, and the right tune, can reanimate a single dead soul. This Job would give the thief enough resources to remain out of the public eye for a long time, comfortably.

The young elf walked out to the prize, and while watching the girl, picked up the bounty.
Before he could seal it away in his shirt's secret pocket, the round section of flooring completely vanished.

Look for Chapter Two in the Spring Issue of Whisper n Thunder.... and see what happens next!