For thousands of years, hunters-gatherers that inhabited the Great Plains of North America harvested and utilized hundreds of prairie plants for food and medicine. The Great Plains lie along the eastern slopes and river drainages of the Rocky Mountain chain. No more than 500 miles in width, they stretch from Canada south to Texas.

Elevations in the Great Plains range from 2000 to 5000 feet above sea level, while rainfall averages ten to twenty inches per year. The minimal topsoil is held in place by native grasses and other prairie fauna.

With the advent of cattle, barbed wire, and bureaucracies, certain indigenous plants became “noxious weeds,” according to the government, including white horehound, chicory, and tansy---noxious because cattle won't eat them.

The Great Plains Botanic Garden (GPBG) thrives on the prairie south of Hermosa, South Dakota, west of Badlands and east of Paha Sapa—the Black Hills. It consists of cultivated gardens and an expanse of open prairie that is the “wild” garden. The visitors center is an original log cabin constructed of native western red cedar, painstakingly dismantled, moved from its original location on a tributary of the Cheyenne River, and rebuilt and restored at the garden site.

The garden is the major project of the Great Plains Native Plant Society (GPNPS), formed in 1984, which mission includes scientific study and research of the plants of the Great Plains of North America, dissemination of knowledge gained, education of the public with regard to native plants, and the continuation of scientific work begun by cattle rancher Claude Barr of Prairie Gem Ranch in Smithwick, South Dakota.

Claude Barr (1887-1982) was internationally known and honored for his work and discoveries regarding native prairie plants. He supplied seeds, plants, and information to scientists and gardeners for many years. His book: Jewels of the Plains, is the premier reference for plains wildflowers and their cultivation. Former Hot Springs resident Sherry Barr Breitkreutz, possible shirt-tail relation and friend to Barr, told me that he worked “so long and so hard on that book,” and expressed sadness that he never saw it published.

Reed was so inspired by his work that she formed the GPNPS with the main purpose being the establishment of a botanic garden in his memory.

During my recent visit during the 2022 open house (the first in two years) Reed elaborated on how the land for the garden was acquired. She had been presenting her vision and plans to various entities around the Black Hills and discussing where the garden might be located.

One day, she received a phone call from

“What about my place?” Hasselstrom

asked. And the vision became reality!!

In the face of urban sprawl and the shrinking

of un-improved land, the GPBG stands in the forefront of protecting and preserving native prairie plants. One section of the cultivated gardens is dedicated to medicinal plants...a tribute to the Native American culture and its knowledge, and a vital and important contribution to society as a whole.

The late author Ed McGaa felt that it was time for Native America to share its knowledge with the world in the interest of healing and survival.

Great Plains Botanic Garden is a place to begin to acquire that knowledge. 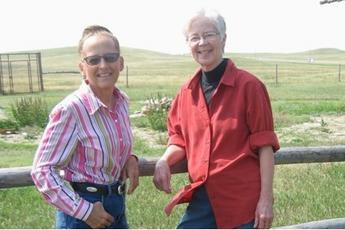