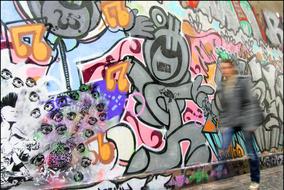 Graffiti: Bridging the Gap Between Hope and Despair
~ Mary Burrows

What was once viewed as teenage vandalism

has evolved into a creative art form.

engagement coordinator with the Rapid City

“I believe that there's a very strong difference between the term that is used as graffiti and then there's just flat-out vandalism. And the vandalism is what is often seen and mixed, intertwined with the terminology and the use of the word graffiti.

“It is disheartening and very disrespectful for somebody to go, you know, ruin somebody else's property. I firmly know that I wouldn't want that to happen to my own property. I think that the art now that is seen should be appreciated for its qualities and its origins, because there is no separating the two. They're one begat from the other, and that's the way it has been, and that's the way it always will be.”

Years ago, a visit to Art Alley in downtown Rapid City revealed random work by anyone who had the urge to spray paint. Now, a permit is required of all artists, and various entities sponsor certain spaces within the Alley.

Tyler Read is co-director of arts education at The Dahl Arts Center in Rapid City and a graffiti artist in his own right. He sees letters, words, and pictures with a message on a wall as a natural evolution of art in a market-driven culture.

The support and recognition by The Dahl of “Graffiti as Art” potentially positions local graffiti and mural artists like Focus Smith on a level playing field when art commissions for public places are considered, just as traditional painters and sculptors are. “Graffiti is really a sort of an extension of advertising and marketing in their most creative forms,” Read opined.

“Focus” Smith, of Hunkpapa Lakota and Dine` heritage, was born in Orem, Utah, to what he describes as humble beginnings. He presently lives in Rapid City, South Dakota, with his daughters.

“Graffiti found me when I was 13 into 14, and I never let go. Graffiti is my first culture.” At age 14, Focus was creating graffiti in Salt Lake City, which, he said, taught me “how to learn at an accelerated rate, set goals and crush them, networking, resource allocation, and the people helped guide me, mentor me, in life and in graffiti,” he said.

Focus does not consider himself an artist, per se. but “a graffiti writer, a creative. I am a writer through and through. To many, this might not make sense—so it's like this—My ancestors created, and created out of necessity, as do I. And, from that creation, designs, patterns were born, and stories were told.

“In my mind, all of life is...ceremony. It's creating yourself; it's building yourself, and building those around you through your struggles and the things that you move through,” Smith expounded. He taught himself to paint and has no formal training. Color “makes the world a better place,” he said.

Through “lots of growing pains—and trial and error—I saw the strengths in a form of communication that is used in the streets, and how that could benefit a new culture [that] I was learning at a young age: my Lakota Culture.”

Focus walks “The Good Red Road” while striving to achieve his goal of “bridging the gap between old Sovereign traditional Lakota culture and today's youth by using graffiti and muralism as the bridge.”

He works “using icons, symbols, and colors that are relevant and teach stories.”

Focus' work is visible in the Rapid City area “in Rapid Skillz, on the wall of Woyatan Lutheran Church, at 'I Am Legacy' in the [Rushmore] mall, The Club for Boys, The Dahl Arts Center,” and, of course, Art Alley. His visibility extends to Sioux Falls and into several states as well as internationally in Taize, France.

Smith “plays with Life on a huge scale—in front of everyone. Making my mistakes out in the light, but transforming [them] into something else: Something that is pleasing to me.

“To me, the work I do is from the actions I take—and, to other people, that's 'Art.' For me, it's a by-product of my life, and symbolic, because it states that I am here, or there I was—continuing in the idea that designs and patterns are born, and stories are told. Because I exist so does this—this piece, this mural, this whatever it is I've just made.

In 2013, Focus and fellow artist and muralist AMP (Aaron Michael Pearcy) created a Hope Project mural on a 30-foot wall in Pine Ridge Village on the southwest South Dakota reservation. The Hope Project engages local youth throughout the country in soul-healing creativity.

Focus and AMP produced a mural “to raise the awareness to advocate for change of the youth on the Pine Ridge Reservation due to the high suicide rate,” Focus explained. At the time, he aspired to create a Hope mural on each of South Dakota's seven reservations, with the intention of producing “a feeling and a motivation that would increase the level of hope amongst the youth,” he said.

In 2009, then tribal president Theresa Two Bulls declared an emergency on the Pine Ridge Reservation that stands to this day because of the high suicide rate among the Youth; some as young as six years old have attempted to take, or have taken, their own lives.

As well as being a writer, Smith is also a teacher. He involves students in, among other things, “re-creating Creation stories,” which “deeply intertwines these lessons” into an experience wherein the participants “learn more about themselves and the Lakota Culture” as they paint their visions. “Everybody...involved...is going to reach somebody in some way, and how that works for them in their lives: It's just cool to imagine the possibilities and the ways,” Smith is quoted as saying.

He is also an entrepreneur. In order to provide for his family during the pandemic Focus channeled his “creativity...into a design centered around community [that] tells a story using original Lakota Beadwork iconography.” From this, a small apparel business was born.

“This is what I do—and it's not a label or category—It's more an act of resiliency, an act of living—being a Lakota and still alive: What I do is an act of resistance.

“That isn't able to be gentrified, boiled down to tokenism, mass produced, and sold. People may steal it, and they have, and taken credit...”

But to Focus, it's all about the future that resides within our Youth as he continues to achieve his goal of bridging the gap between past and present and honoring the Lakota Way.

A visit to Focus' Facebook page will show more of his work and recent accomplishments.