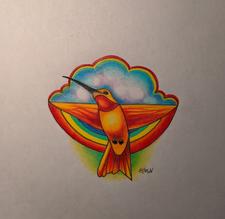 There was a time lesser known when silence

lay quietly like fog atop the lower lands. It

would mysteriously hover just above the

valleys and extend far beyond nearby rivers

and streams in all directions. Emptiness.

Nothingness could be heard. Uncertain

shadows lingered. River rocks would awaken just long enough to tell stories of singing voices from long ago. Voices of our grandmothers and children which streamed and penetrated like sharp light bringing forth unbreakable dreams and joy. Their voices burst through crevasse’s in darkened caverns transforming the inner-energy from deep blues and purples, to faded reds and orange’s, until finally fantastic glowing golds would completely fill all spaces. Pure illumination sprang forth and blazed like flint scraped by blade... a new birth is emerging. The spark of life is beginning a new cycle, a new season. The fog lifts…

Eyes begin adjusting to welcomed brilliance. Warm… energizing… inspiring. Up above the sky is perfect blue and the winds feel clean and crisp and full of rich oxygen. This feels good in the lungs, much like a welcomed drink of cool river water after a long days journey. Perfect white clouds drift lazily casting friendly shadows on the sweet grass below. They bring no rain as it is not that time of season yet. The clouds move like herds of playful white buffalo as they laugh and graze on blue sky grass. One can hear the mountains murmuring with one another, pausing briefly from their sacred meeting to laugh at the joyful sky herd, then resuming their discussions once more. The winds get tickled and chime in on the fun kicking up energy reminiscent of wild mustangs running free across the lands, stirring up all of life and activities of the day. Excitement is in the air.

From the northern sky two twin eagles dance in circles wingtip-to-wingtip edging over the mountain tops and making their way to the center of the valley below. They meet here often because the mountain ranges on both sides keeps their conversations and secrets safe, and confidential. Riding and gliding the eagles spin and dance. Not a sound can be heard, only softness. From the east direction red and gold reflections glimmer like shimmering steel and a friendly cry penetrates the air signaling an arrival. Brother hawk comes into focus and makes his way over to twin dancing eagles. Upon his arrival hawk joins in with the circular aerial dance, only flying just a bit lower in the middle skies. Together the three winged ones flow and glide in perfect spirals above the valley saying their hello’s and how are you’s. It has been awhile since twin eagles and hawk last spoke. Three corn seasons to be exact. This meeting is long overdo and there is much to share and report on. After a few rounds of alignment and soft silence hawk feels comfortable speaking first. “It has been mentioned there is a need for stronger winds to move through the leaves and stalks of the corn crops below. There is also a need for the winds to sweep closer to the soils and spread the seeds for the seeds are not reaching far enough and the blooms are not strong enough to produce new growth. Smiles are fading from the faces of the earth walkers tending to the lands. This was brought to my attention by the plant people, the creepy crawlers, and by brother crow. They asked me to inquire with you both and see if Creator could help out in these matters. These are my findings. I have spoken.” Softness and silence lingers in the sky between twin eagles and hawk.

Twin eagles stare at each other as twins often do. They are a perfect mirror image. They effortlessly ride the wind curls and float on the upper sky rifts. A certain stillness rains down over the lands as mountains stop speaking and are now listening. Hawk waits patiently in the middle skies as he knows an answer takes time, sometimes days, weeks, even years. The sun shines brighter as it crosses high noon bathing everything in radiant light. Twin eagles with their twin minds summons hawk to the upper skies to join them, and so he does. As hawk makes the climb to the higher realms he feels the exhilaration and deepening connection to father sky. His lungs filling to the brim as his heart expands to capacity in glorious ways. Hawks wings thrust stronger than ever before, his vision clearer, his body lighter. He gazes at the richer-crisper blue shades hidden way up high in the sky. Blues not visible to many. It is an honor. He joins the aerial hoop of twin eagles. Round-and-round they spiral. All on the same upper plane now, all three in unison.

Twin eagles speak in harmony with one voice saying, “Father sky has decided. One feather must be offered by each of us, two eagle feathers and one hawk feather. Our offerings will merge sky and earth with clouds and winds, together with the trees and flowers and seeds below. Solar rays and Great Spirit will weave together creating a new winged one. A new relation. She will bring winds to the rich soils of the earth and restore smiles and beauty to the faces of two-legged earth walkers. This new winged relation shall be called hummingbird and her spirit and energy will be as powerful as the sun, and she will move swiftly and effortlessly in all directions. Her wings will be small but they will create forceful winds to spread the seeds of corn and other crops. Because of her great strength she must be kept small in stature as well. Hummingbirds’ wings and her spirit are far too powerful. She would generate too much wind with her wings if she was medium sized or larger creating unprecedented storms and stirring up the soils and dust of the land far too much. This would not help earth walkers or their crops, or the creepy crawlers as you can see. Hummingbird will drink from sacred nectar’s and be lighter than a rose petal. Her courage will be that of a mountain lion in order to fend off any who wish to make a quick snack of her, yet she’ll be gentle enough to play with children and their parents. Tickling their faces and whispering sweetness in their ears. Hummingbird will glimmer with illustrious rainbows as she creates an abundance of color and beauty, food and medicine, new plant relations and more welcomed abundance for future generations. Together as one we have spoken on behalf of father sky and Creator. And so it be.” The twins’ voices trailing off into silence.

This being made known all three are in agreement. Three feathers are plucked one-by-on as three beaks make an offering into the winds. In a flash of glitter and swirl of quicksilver hummingbird suddenly appears. Her body and wings are so small and petite but he power and tenacity is felt miles away. She quickly acclimates with all that is, and in a strange way, it’s as if she’s always been here but was never actually seen until now. Twin eagles and hawk watch her as she quickly darts and descends to the lower winds, and closer to the earth below. In an instant everything begins growing and blooming with lightening speed. The range of color and growth now spreads farther than twin eagles’ eyes or hawk can see. Like a wave, beauty reaches over the mountains and across the plains, beyond the trees and all the way to the oceans far unseen. Shades of dazzling visions blanket the flesh of mother earth as abundance now sprouts everywhere. Hearts and smiles shine brightly below... the winds begin to shift. They become lighter. Softer.

Three winged ones still remain in the upper sky but only for a short time more. Their circular flight begins to slow and gently disband for now. It is time to move on. “Thank you brothers.” Hawk says to the two twin eagles as he descends back to the middle skies, “Looking forward to our future gatherings again. Let us plan for sooner than later.” He soars on with a twinkle in his eye. With big hearts smiling twin eagles both nod agreeably, “It is always good seeing you brother hawk.” Saying together in unison with one voice. “Yes, let us do just that. Farewell beloved. Stay safe and strong.” All three depart knowing there will indeed will come a time when they all gather again, and again, and again. In a blink of an eye twin eagles dip beyond the mountains of the north while hawk becomes a shimmering spec of red and gold streaks in the distance. Hawk flies towards the familiar green flash of the west as it guides his way home. Daylight dims, the mountains yawn, and the winds grow calmer still. Laughter and joy gently echo in the coolness of the evening as stories and music begin to arise, along with food and celebration and dance circulating around warm-glowing fires. Fire flies turn awaken as the day recedes into night now. Tomorrow promises new sights never before seen. Today is a good day.