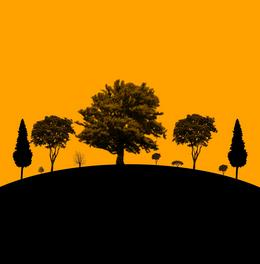 Often the health of the natural environment is tied to

the function of the natural ecosystems that comprise it.

The function of these ecosystems depends on a

multitude of factors, such as climate, chemistry and

the biotic elements that make up the essence of their

being.  But their ability to function also hinges on the

processes that have been carried out for millennia.  In short, these natural ecosystems depend on land, and more specifically wild land.

Therefore, it is impossible to discuss negative effects on the environment without discussing the amount of wild lands lost to human development.

The action of human development of land has been occurring at an unprecedented rate over the last century.  And perhaps not so coincidentally, this loss has coincided over relatively the same time as loss of Indigenous lands throughout the world.  To understand Indigenous culture is to understand their intimate relationships with lands, and the wild and natural ecosystems that comprise them.  For example, it is safe to say that every North American Indigenous culture’s origin story involves important landmarks and wild flora and fauna that inhabit those local ecosystems.  These beliefs have led to a deep-rooted respect and love for the lands that Indigenous peoples have inhabited for millennia.

According to a 2016 study published in Current Biology, approximately 10% of the world’s wilderness areas have been lost to human development since the 1990’s1,2.  That equated to approximately 1.2 million square miles of wild land lost2.  And according to a more recent study in 2018, more than 77% of world lands (excluding Antarctica) have been modified by the direct effects of human activities3.  Additionally, five countries, including the U.S., contain more than 70% of the world’s last remaining wilderness3.  This has coincided with the loss of lands under Indigenous control and influence.  For example, over 1.5 billion acres of land has been seized from Native American tribes by the U.S. government, since the inception of the country4.  This seizure of course was to make way for the growing number of non-Native Americans that would form the core population of the U.S.

The world has been impacted by humans since human beings have existed, so I am not advocating that the only way for natural ecosystems to function in a healthy state is through the absence of the human race.  But I must simply ask, can we do better?  And more specifically, can we learn from traditional Indigenous cultures on how to better co-exist with our surrounding environment?  Not to say that each tribe currently protects the health of wild lands and ecosystems than any other governance, but given the strong cultural ties Indigenous people have to the healthy state of natural ecosystems, perhaps the loss of Indigenous ownership of lands and the loss of wilderness is not such a random coincidence.
As a wildlife biologist, I see the effects of human development and the loss of wild lands on a daily basis.  One only needs to look out at the urban sprawl of most any medium-sized to large western U.S. city to see the encroachment of human development on wild lands.  This sad sight is all the more evident with the fact that we are not only losing the healthy state of the natural ecosystems that lie upon those wild lands, but also the recreational opportunities we may enjoy on those pieces of the world’s surface.  Additionally, as a Navajo tribal member I can’t help but be a bit sad by the cultural value that we are losing by continuing to alter those same wild lands, that once played a central role in shaping the traditions and culture our ancestors worked hard to develop.

If you think about it, when was the last time you saw a piece of infrastructure erected on an open plot be decommissioned, deconstructed, and the land returned to the natural state it was in prior to the existence of that structure?  This lends credence to the fact that once things are altered by humans in a profound way, they rarely if ever go back to the way they once were.

This is important for us as Native Americans to remember as we fight the legal battles to acquire and protect sacred places.  But it is also important for the larger biological, natural resource, and outdoor recreation community to take note when fighting for protection of these wild lands.  It is important to understand the impacts from the loss of wild lands to the overall health of the larger world environment.  In the mean time, I may just purchase some open parcels myself and work to designate them as wilderness or reservation, one acre at a time.