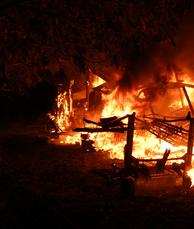 of beliefs," or conceptions. consider the glaring

presence of another word within the word "belief;" that

word is lie. As time progressed, we were taught to fear,

and taught to feel helpless against an ever expanding

power structure with no respect for the Life Ways of

old, and definitely no respect for The Sacred. Like the

"Wizard of Oz," hiding behind a curtain of illusions and deceptions, the power structure gave itself the appearance of power. The construct, or matrix, of the illusion of power was deeply ingrained into our collective consciousness of the Indigenous peoples through pure, and unadulterated brutality, and through acts of sheer terror, which are still being perpetrated against us to this very day. Ironically, the American mainstream, believing that our decimation was for their benefit, are undergoing the same process of oppression.​

We are witnessing history with an empire that does whatever it wants to do with impunity, under the guise of power. We are dealing with a government that needs to feed itself at the expense of other nations, in order to stay alive. The American empire believes itself to be powerful, yet it is not. Empire is violence, abuse, intimidation, cruelty, and subjugation, but it is not power. The government has all the money (because they print it), all the weapons, and all the technology to create the illusion of power. They use force in order to steal from those unable to defend themselves. They use the "Hegellian Dialect" (problem, reaction, solution), creating the problems that justify the use of force against perceived, or created, adversaries. through lies they galvanize the public into manufactured consent. This began with Pedro Madrugaz (a.k.a. "Christopher Columbus"), continued during the "Indian Wars," and continues in Indigenous and American "relations" now.​

The government used propaganda to demonize the Indigenous peoples and the "settlers," hungry for Native lands, were galvanized to fight us. They took by force what did not belong to them, and they used force to do so. Now, as any and all acts of violence against us are ignored, despite the ongoing bloodshed and land thefts, the empire's patterns of conquest go on worldwide. In fact, the "Indian Wars" never ended, and our Indigenous Relations south of the American border (i.e Bolivia and Brazil to mention two) are also facing genocidal extinction by the hands of the descendants of their 15th century ancestors...​
​
Despite the blatant violence of the American Empire and its accomplices, the American people do not see it, because they choose not to see it. As Frederic Bastiat said, "Government is the great fiction, through which everybody endeavors to live at the expense of everybody else." For over five-hundred years our peoples experienced this, and nothing has changed, and now other nations are facing an empire that is more than willing to impose its force upon them to take what what does not belong to them. This is not power, but is an overwhelming illusion thereof that is dark, brutal, and downright evil. ​

"Necessity is the excuse for every infringement of human freedom. It is the argument of the tyrant and the creed of the slave." -William Pitt The Younger -This quote says it all. The psychopath who commit heinus crimes, whether government officials, or local gang "warlord," seeks that which is, in reality, unattainable, namely, power. Once the "necessity" for criminal violence is "established, the misconception of power is planted, and takes root as time goes on, and tyrants successfully create the desired state of slavery, of spirit, mind, and body.​
​
The above portion, I am certain, has caused a stir. For those who were able to read through the first part, I applaud you. There are realities that are difficult to face, yet, they are realities that must be faced, if we are to stand a chance against the predatory energy that surrounds us with such force, and delusional manifestations of pseudo-power. Now comes the revelation of what power truly is. Should I have remained in the "zone" presented above, one would conclude that we are powerless under the rule of psychopaths, and their multiple abuses committed under "color of law." The truth is that we are not powerless. Even "...the dead are not powerless." -Chief Seattle​
Look at yourself in the mirror and ask yourself what you see. There are criminally insane people, as mentioned above, that look in the mirror, and see more than what is actually there. Those people come from a place of disconnection, and shallow self-importance. When you look in the mirror, you would probably see much less than what is actually there. Here is the truth, with no misconceptions. We are human beings. We are parts of the Earth and Sky. We are manifestations of Them, and connected to All Our Relations with whom we dwell upon Mother Earth. We are power, true power. We share the same elements that are within the Earth and Sky. It does not matter what we believe about ourselves. What matters is who The Creator made us to be. ​
People can be petty, and cruel. They can make us feel that we are worthless, if we allow them to do so. ​

I wrote of an empire that is ruled by those who believe that they have power, but it is a dangerous illusion, for it is not based upon the Sacred connection to Earth and Sky. We know that we are powerful because Earth and Sky are powerful. I am speaking about power that abuses, but rather, power that works for the good of all. We are the children of Earth, and if we remember Her, She will take care of us. Those who disrespect the Earth are weak, and need the illusion of power alive so that they can feel superior to everyone else. It is actually sad. ​

We cannot fight the "misconceivers" of power. They outgun us. However, in the words of the late, great John Trudell, "we can out-think them." With all their weapons, and all their technology, there are things they will never be able to own, or control. They cannot control our spirits, hence, they cannot control our minds, which produce incredible and unimaginable power. ​

Here is something to think about. There are those who believe that the Earth is being destroyed, and go around shouting apocalyptic warnings of Earth's destruction. While it is true that we have been terrible stewards of the Earth, and All Living Beings, humans are not all that; we are not the "masters" of the universe. To believe that we can destroy the Earth is foolish and arrogant. Yes, with the proliferation of nuclear power, and the idiocy that pushes for it; with the governmental and corporate propensity to think themselves the lords of all; with the crime of climate engineering, weather and biological warfare being waged in the Skies over our heads, and so much more, we are witnessing the onset of Venus Syndrome. In humanity's foolishness, the American "power" structure, and others throughout the Earth, are making the Earth uninhabitable for All Living Beings, but the Earth can never be destroyed. We, the sons and the daughters of Earth have the power to let them know this. Listen, even if they kill us, they cannot defeat us. THAT IS POWER, Sacred power. ​

Spirituality is not chanting ritualistically. It is not a set of rules to follow. Spirituality is our ability to "use our minds in a clear and coherent manner (John Trudell)." The Empire's theater of the absurd is abusive, brutal, violent, and cruel, but still absurd. Although our bodies die, our spirits are energy that will live on. That is power. Do not fall into the misconceptions of power that is promoted by the so-called "ruling elites." The Creator made you who you are, the fools of a crumbling empire did not. You are Sacred. You are a child of the Earth and Sky. ​