With summer ending and school back in session,

schools will once again instruct children on the

history of this land. A big concern to keep in mind

is how Native American history, culture and

heritage will be addressed. With efforts by the

right to whitewash historical facts and to indoctrinate children to beliefs and historical disinformation that serve them, it becomes imperative for parents, educators and the community to ensure that the truth of history is not stifled.

As a teacher who taught truth, I have been concerned when I hear young children, most typically during the Thanksgiving season, talk about how Squanto and the Pilgrims sat down together for a great feast because they all got along so well. Not exactly accurate, right? But it isn't limited to Thanksgiving only. Even today, there is still limited reference to Native Americans after 1900 or textbooks giving an inaccurate depiction of current Indigenous communities. Or to see that the texts imply that colonization made First Nation lives so much better, and with the efforts of the right, texts being written to brainwash youth to believing that is so. Or the inaccurate suggestions that Indigenous lands were willingly "sold" to white settlers, children willingly went to boarding schools and never mentioning the forced hair cuts and children made to wear white people clothing, while the clergy and teachers forced them to assimilate and cast aside traditional life and teachings. No mentions of the 60's scoop, the forced assimilation of tribes and children into white culture, the forceful taking of children who were placed in oppressive boarding schools and the multitude of deaths which followed. The genocidal policies of government. Sure smallpox is mentioned, but whitewashed to suggest deaths were all accidental from blankets given by well-meaning missionaries.

There are some states that have taken great steps to ensure that historical accuracy is part of the curriculum, usually through the activism of First Nations people who have helped educate and inform the legislatures and Educational entities through long hard work, diligence and much patience. In the early 2000's, Montana restated language added to its constitution in 1972, and later implemented by the state legislature in 2005:

"In 1972, Montana added language to its constitution pledging to use education to preserve the unique cultural heritage of Native Americans. After nearly 30 years of inaction, this pledge was codified with the Indian Education for All (IEFA) Act, which says that every student in Montana, whether native or not, should 'be encouraged to learn about the distinct and unique heritage of American Indians in a culturally responsive manner.' Several years later still, in 2005, this act was logistically implemented when the state legislature gave the initiative financial backing." (1)

And more recently, Washington, in recent years, made it a requirement that schools teach First nation history. The situation in Washington, however, is quite different than the Montana requirements.

"But unlike the $4.4 million the Montana legislature allocated for its tribal curriculum, Washington's law didn't set aside any funding. Whatever funding there is comes from the tribes themselves, private organizations, and the Office of the Superintendent of Public Instruction's internal budget. Together, they've raised about $300,000." (2)

There are other states also working on, or have created policy to include Native American teachings into the curriculum, have formed committees and programs with Native American leadership and guidance to address developing curriculum and resources that are historically accurate, cultrally sensitive and honor tradition and heritage. In South Dakota, the Oceti Sakowin Project was developed and includes video that was developed to give educators knowledge and understanding of the Oceti Sakowin culture:

In Maine, great work has been undertaken to ensure the accurate teaching of Maine Native American history in public and private schools. One driving force in Maine is Donna Loring, who served on the Maine Legislature as a Tribal representative for the Penobscot Nation for 12 years. Loring, also a writer, developed legislation to require all schools in Maine to teach Maine Native American history. It was signed into law in 2001.

"The most important part of the law was the creation of the Native American History Commission to help schools gather a wide range of materials and resources to help implement the law, Loring said. 'I asked people in other states with laws requiring the teaching of Indian history why they weren’t doing it and they said they had no materials. That’s why the history commission was very important. It led to the creation of the Wabanaki Education Curriculum which tells the story of the Wabanaki people from the Wabanaki perspective. It’s leading us out of the dark ages.' ” (4)

As summer edges its way to the ending of lazy days in the sun, romps on beaches and family outings and vacations, consider how your child will be learning the history of the First People of this land you call home. Check with your child's school to discover first hand how they are implementing the instruction and what curriculum they will use and keep an ever mindful and alert eye to how the right is trying to subvert truth through their attacks on the educational system and teachers who will still take every effort to teach truth. Much work has been done over the years to develop curriculum, contribute to knowledge and understanding for native and non-native teachers alike and research and hard work to discover and develop resources for educators to use. And why is this so very important to all children? Donna Loring sums it best, so I will leave you with her words:

"The fact that Native history is required to be taught in public schools in Maine has begun to give Native people a strong, clear voice, a voice that they never had. The state of Maine is slowly learning from these voices. An honest, truthful and inclusive educational system needs to emerge from the dark ages and into the light of full knowledge. Native history must be a required subject not only in public elementary schools but also in colleges across this country. It needs to be part of the core requirement, not just a token program of Native Studies or help for Native Nations. It is time our story is told and the educational system unlocks that one-way gate and allows us to take our rightful place in the history of this continent. It is the right thing to do, and I guarantee the results will be amazingly powerful and healing. " (5)
Teach Truth and acknowledge Indigenous history and honor the sacred. 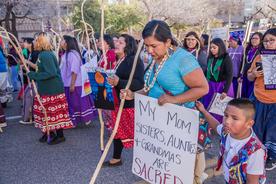