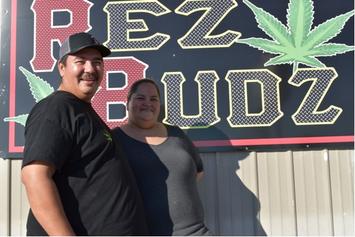 and Derek Janis, along with their children,

have always been community- and

Village within the sovereign Oglala Lakota

Bagola and Janis are both employed in

Additionally, they and their children have implemented much-anticipated community events that were attended by all. As a family, their collective goal included “making life better for local youth” and instilling hope within them.

In addition to youth suicide, the issue of illicit and dangerous drug use is a major concern throughout the reservation. Bagola cited drugs, “ Methamphetamines, alcohol abuse, narcotic addictions, and the new issue was Fentanyl.” They heard stories about marijuana consumed by some of the People being laced with Fentanyl by street dealers.

At one community meeting, the People heard a physician from Indian Health Services advocate for the legalization of cannabis in his belief in its medical benefits for common health issues and in combating addictions, as well as an alternative to pain relief.

“Chase Iron Eyes, a spokesperson for the (Oglala Sioux) tribe's president, Julian Bear Runner, said the vote reflected the difference in how many tribal members perceive alcohol and marijuana. He called alcohol a “poison” that was forced on the tribe; whereas he described marijuana as a “healing plant" that presented a path out of poverty and historical trauma.
“The Oglala Sioux will become the only Native American tribe to set up a cannabis market in a state where it's otherwise illegal.”

In November of 2020, South Dakota voters also voted to approve the use of medical and recreational cannabis.

Ben Hartman, in an article entitled Marijuana in Ancient Times: A History of Cannabis, writes, “From ritual rites in ancient China to a treatment for Pharaohs suffering from glaucoma or a way for Dutch ne'er-do-wells to unwind during the heyday of the Dutch East India Company, marijuana has been part of the human experience since way before anyone ever dreamed of the Summer of Love.”

Hartman goes on to quote E.L. Abel, writing in Marihuana: The First Twelve Thousand Years, “the earliest record of man's use of cannabis comes from the island of Taiwan located off the coast of mainland China,” in an ancient village dating back over 10,000 years to the Stone Age.

Known as “ma” in ancient China, cannabis was used for textiles, especially for those who could not afford finer fabrics. Paper is probably the most influential invention of the Chinese; the world's oldest known piece of paper, dating from 140-87 BCE and made of hemp fiber, was excavated from a tomb in Shaanxi province.

Chinese use of hemp seeds as a food source continued into the 10th century. The use of cannabis seeds for medicine has been recorded in Chinese medical texts for 1800 years.

The pharmacopoeia of the Meiji Era in Japan describes Cannabis Indica as an anesthetic.

To the Egyptians, cannabis is shemshemet, and “has remained in active use since the time of the pharaohs.”

In India, cannabis has been used for thousands of years in the worship of Shiva, and is an ingredient in “bhang,” a drink containing milk, cannabis, and various spices. It is also part of Ayurvedic medicine. The Ather Veda, one of Hinduism's four sacred texts, names cannabis as one of the five most sacred plants on Earth, a “source of happiness,” and “a liberator.”

Sula Benet, Polish linguist, determined in the 20th century that the term “kanah bosem” is most likely the origin of the word cannabis. In the book of Exodus, kaneh bosem is “described as an anointing oil for the Hebrews' tabernacles.”

By October 2020, the Oglala Sioux Tribal Council had drafted an eighty-page ordinance regulating use and possession of marijuana on the reservation and voted 11-8 in favor of its enactment. It allows for the use of cannabis by medical patients and non-patients aged 21 and over. Cultivation is permitted, as well as dispensing; so are facilities for social consumption, accessible to both tribal and non-tribal members. With an eye to the future, the tribe had updated their laws prior to the statewide vote on legalization.

Bagola and Janis put aside every extra penny to invest in their dispensary, even going so far sometimes as to forego paying their personal bills, but they believed that the “risk was worth the wait.” Rez Budz Dispensary in Pine Ridge opened on July 27, 2022, at 9 a.m.The business also has its own a grow, and Janis is preparing to produce his own gummies, which have been sent away to test for potency.

The whole family invested time and sweat-equity in the business, which helped them to stay close. “It gave us a goal,” Bagola said, “that we are all very proud of today as we watch it grow, but also the many benefits of learning about cannabis each day. My children pitch in when we need them to, and I'm so proud of them all and their continued support.”

Their “family” has also expanded into the helpful group of cultivators, processors, and other dispensaries. Bagola and Janis say, “Wopila,” (thank you) to these helpers and for the support of the locals.

“We would like to encourage many of our own people to become part of the industry, and never be afraid to ask us questions you may have when it comes to getting started. We like to share the knowledge we have gained with others,” said Bagola.

The legalization ordinance recommended a 15% (is now 10% recreational, 4.5% state sales) tax on cannabis sales with the planning of a {drug and alcohol} treatment center for the Nation as a top priority. Bagola emphasized the dire need for such a center in an area where resources are scarce, and those available are backlogged because of the vast needs of Tribal membership. De-criminalizing cannabis can only have a “positive impact” on future law enforcement in that crime rates for possession will be eliminated.

“I hope that in the future, cannabis will provide good employment opportunities for our people. But also be able to provide the education and training to be able to help them if they should one day choose to become a processor or a cultivator,” said Bagola. (I hope)...”someday our own local college center can provide the education or certifications for the cannabis industry. We come across many with questions on growing cannabis and how to get started. We still are a very community-involved family, and we always try to look for ways to give back to our communities.”

​
Marijuana in Ancient Times: A History of Cannabis | The Cannigma