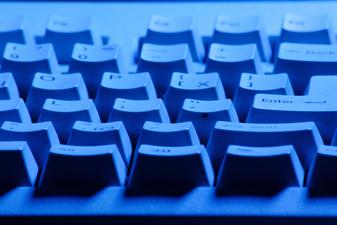 The most frequently used letters on my

keyboard have vanished, worn away from

consistent use over the past five and a

half years. Despite thorough cleaning,

some keys don’t move at all. A new

replacement is tucked away on one of my

wish lists online, as if the anticipation of the order would spur me to hit order.

So convinced my bestselling novels and the countless poems would all come together with nothing more than a pen and paper, I sidestepped typing classes in school. Somewhere in the dark recesses of my young teenage mind, the idea of typing class equaled secretarial jobs, and the very thought sent me spiraling.

Verbalizing that pigeonholed concept didn’t set well with my late mother, who spent thirty years as a campus secretary for the local school district. She was still reeling over the fact I used up all the paint she purchased for a project, although that softened when my first painting sold at thirteen. I was pushing buttons all right, well ahead of typing and computers.

Gradually, I learned the classic art of hunt and peck, in efforts to add to my work resume. The real test came in late nineties when my son asked me to type his handwritten material to the computer for a major project. Thankfully, only the typed words appeared on the screen, without the constant embellishment of curse words as I struggled to create a cohesive document. Panic attacks ensued each time it appeared his computer was un-alive, due to my naïve approach at that time to the tech world.

Practice changed that, along with a split keyboard that allows my hands to sit naturally, and although I couldn’t pass if someone gave me keyboard layout and asked me to fill in the letters, my hands know instinctively where words are. Ok, I can identify where the letter ‘A’ would be, because it’s been gone the longest. Even the hand lettered marker faded away. Nonetheless, I am still not quite ready to buy a new one yet.

Raised by parents and grandparents who experienced the Great Depression, as well as WWII, the concept of mass consumerism eluded them, and in turn, affected my sibling and me. It’s not to say we didn’t have new things, it was more about being selective with the choices and reusing, and re-fabricating old into new. We’re both passionate about that. My office space, formerly my son’s room, boasts beautiful faux leather walls that fool the eye. Installed in the mid-nineties, it was a simple, and cost-effective way to give his room an update. A few rolls of brown kraft mailing paper, a lot of old paper bags and plenty of plain

Elmer’s glue and water, along with a night or two of tearing and crumpling paper, produced walls that are beautiful and easy to maintain.

My mom and grandmother were expert seamstresses, and my sibling followed in their footsteps easily, producing garments rivaling name brands. They wasted no fabric, and scraps were used to make beautiful potholders, patches for worn clothes, and the rest for cleaning rags. Many of those potholders are still in use in my kitchen, as well as my sons. My dad and one grandfather were mechanics and welders, so there was a plethora of scrap metal and tools in the sheds, ready for them to craft everything from our backyard swings, slide and see-saw, to barbeque pits, clothes-line poles, and countless other creations we used, or sold.

One of my favorite gifts growing up was seeing my new bicycle sitting outside during the holidays. It wasn’t new, simply reborn with a fresh coat of paint, new tires, a new seat, and often fancy handlebars. It took me through grade school and into high school with just a little tweaking by a talented mechanic. I can still hear my grandmother’s laughter years later, when she asked what I wanted for a gift. It was always the same, her famous tea cake cookies and a bag of rags. And I received both every year. Occasionally, friends gift me with old sheets or other cloth items, that I cut and use in the studio, instead of tons of paper towels.

Basic soaps and vinegar were used instead of expensive name brands. My mom did buy toothpaste, but most of the time, we used baking soda. I have a small bar of homemade lye soap one grandmother made in the forties, one I will never use, but it is a testament of her way of making over buying. I have a jar of tallow from Papaw that he used on our boots to soften the leather, as well as on his rifles; and he told me of mixing different herbs and plant material with it, to use as a skin balm.

Recently I watched a short video highlighting the pantry, and the dressing room of a well-known celebrity. Honestly, it was shocking. The pantry was stocked like a small grocery store, with multiples of each item. It easily contained several thousands of dollars of canned goods and snacks of all types. The dressing room rivaled department stores with hundreds of garments, bags, and shoes. All for one person. I can’t perceive how one individual could reasonably use that many things in a single year, or three. There are influencers on social media who do indeed, focus on helping others, but there are so many others who are lost in a maelstrom of glitz, glamour, and money.

Yes, perhaps my opinion borders on the bitchy side, but I can’t help but think about the countless people who need food, warm clothing, and a safe place to be. During a recent binge watch of Longmire, the character, Henry Standing Bear, took it upon himself to quietly take on the requests left for the late Hector, who in his own way, did his best to protect those who were left without hope. While I do not advocate for vigilante action or violence, the idea of placing a message for hope in a mason jar, knowing there is someone out there who cares, is appealing.
Living in a simpler way is good for the soul, and it does connect us with our Ancestors.  If you are blessed with extra, find a way to share it with others. Donate locally, or donate to Whisper n Thunder’s WINDS Scholarship fund, or the EREZ fund to provide heat in impoverished rez homes. Think of it as a message of hope in Hector’s mason jar. I think the Ancestors would like that.