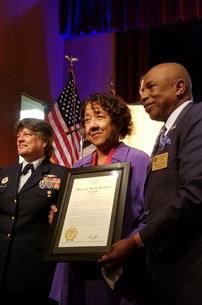 the US Army and has been honored by

induction into the North Carolina Military

became the first female officer of the 82nd

the integration of females," writes North

Carolina's Governor in his North Carolina

proclamation. He proceeds to announce

that "Now, therefore, I Roy Cooper, Governor of the State of North Carolina, do hereby proclaim June 4, 2022, as "North Carolina Military Hall Of Firsts" in North Carolina, and commend its observance to all citizens."
Dr Blue appeared amidst dignitaries and military officers to accept this well-deserved reward. This Cherokee Warrior states that she is "surrounded by "a flurry of military activities and honors--the magnitude of blessings."  Dr Blue celebrates her "Induction in the NCDMVA Hall of Firsts and speaking at a Ft Lee Aerial Delivery Observance followed by royal treatment." Further, this courageous leader described tributes "ending in being awarded the Honorary Parachute Rigger and presented a Rigger Red Cap that I always wanted to train for but was denied."  Dr Blue rejoices at recounting when an officer "called a formation and declared me an honorary Parachute Rigger, fulfilling my once dashed dream of earning that occupational badge. Now, see, you have made me realize why GOD had me travel in the paths he sent me to. Wow!"

Now numbered among miIitary legends herself,

Dr Blue says that "I have been surrounded by

legendary military since the 4 June Ceremony

in NC." Treasured family also joined in the

awards ceremonies and wreathed this warrior

in accolades and appreciation. Native Americans

serve on the US military in tremendous

proportions. "We, the  great mass of the people

think only of the love we have for our land, we

do love the land where we were brought up. We will never let our hold to this land go, to let it go it will be like throwing away (our) mother that gave (us) birth," reflects Aitooweyah in a long-ago letter to John Ross, Principal Chief of the Cherokee, John Ross. Dr Bennis Blue has earned respect and a place in the North Carolina Military Hall of Firsts for her love of land, culture, faith and family. 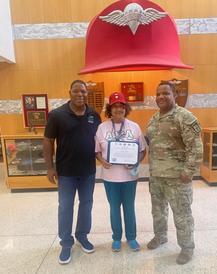