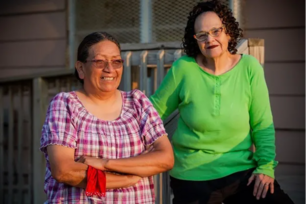 Standing In the Eye of the Storm:
Youth Suicide on Pine Ridge

Twenty years ago, suicide among youth on Pine Ridge

Reservation in South Dakota was minimal. In 2014,

declared an emergency after 14 youths committed

He went on to share that many non-Natives he met at that time attributed issues on Pine Ridge to “The Indian Problem,” espousing the attitude that “they bring it on themselves.”

Fenton drew a direct connection between youth hopelessness and the way they were treated when off the reservation. He cited several incidents (including the 2014 beer-pouring horror at a sports arena that sparked The Rapid City Community Conversations, as reported in Whisper n Thunder) that reinforced his argument that Native youth get the message that their lives are not valued, “that they have no place beyond the reservation. These experiences make these suicides bigger than Pine Ridge.”

“Poverty, alcoholism, violence, and mental health issues are common on the reservation, and suicides are not unusual there, but a cluster of younger deaths has shocked the community.”

A quote from the article:

Teachers recently foiled a plan by several high school girls to take their lives simultaneously. Pine Ridge School, which offers kindergarten through high school, is seeking federal money to keep its dormitory open during the weekends so students don't have to go home, where most of the suicides happen Many students spend the school week on the campus, in the reservation's largest town, to avoid long, daily bus rides. “Before cellphones and everything, a kid could get away from bullying at school by going home, and they felt safe,” said Yvonne DeCory, a suicide prevention outreach worker at Pine Ridge. But no more. “You're no longer safe in your own home,” she said. “These kids feel that.”


Amanda Cordova and Mary Cate Carroll described teen suicide on Pine Ridge Reservation as “epidemic” in the New York Times on October 25, 2019. Conditions on the reservation then included 44% of people living below the poverty line, 70% unemployment, a quarter of children born had Fetal Alcohol Syndrome, and an overall low life expectancy.

“This toxic mix of poverty, unemployment, and poor health most likely has contributed to a suicidal crisis among Native American teens,” they wrote.

While committees formed, panels met and discussed, reporters reported, and the suicide rate continued to climb, Yvonne “Tiny” DeCory has been “doing her thing” for and with the children and community of Pine Ridge Village and the reservation as a whole since 2000. What started as a reading program, The BEAR Project, has grown into an operation that facilitates many needed services, including one of the few suicide awareness and prevention programs on Pine Ridge.

According to the Facebook page, The BEAR (Be Excited About Reading) Project, founded by DeCory, began when a group of college and high-school students started teaching village youth reading skills. The program operates today from Billy Mills Hall in Pine Ridge. When the pandemic hit, the Project expanded into suicide awareness as well. It is a 501c3 non-profit that runs community events for youth and for the Pine Ridge community and beyond.

“The BEAR Project is about bringing together the four colors of mankind, strengthening hope with dignity, and making a difference.”

DeCory and her assistant Eileen Janis, are among those standing in the eye of the storm that is teen suicide on Pine Ridge.The Project assists youth that are struggling with reading and with serious life issues.

During his childhood, Los Angeles photographer Noel Bass struggled with depression. Later, as a student of psychology, when he learned of the high suicide rates on Pine Ridge, he started volunteering in the community and spent years gaining understanding and earning trust of the Natives.

Bass described how he first learned about the difficulties that Pine Ridge faced during an e-mail interview with Indian Country Today:

“I learned about the Native American struggles with depression and suicide when I became interested in psychology. I was shocked to learn about the situation in Pine Ridge, which had declared the State of Emergency in 2009, and the state of poverty they were living in. It was all news to me, being from the west coast. I felt cheated as an American that there was not widespread national knowledge about the issue.”

He spent time in the community in 2011, returned in 2012, and subsequently crossed paths with Tiny DeDCory, former lead supervisor and outreach worker for the Sweetgrass Project (a federally funded suicide prevention program, now defunct) and founder of The BEAR Project. She was and is also one of the few suicide workers on Pine Ridge.

Bass met DeCory through Eileen Janis, a knowledgeable and spiritually aware Lakota woman, who now serves as DeCory's assistant at The BEAR Project. Tiny, Eileen, and their student volunteers—many themselves survivors—have created a performance group known as The Bear Program, which uses life-sized “mascot bears and other animals that dance and perform comedy sketches for the benefit of Native youth to empower them and to bring joy to their lives of struggle.” He learned that, though the dancing characters' costumes were threadbare and held together with duct tape patches, the Bears are about “an unending love delivered to the community.”

“The Bears are a symbol of resiliency and hope, and persevering against insurmountable odds,” Bass said. “They are suicide survivors who have collectively come together to help bring awareness. It's a magical story. And that message is real in Pine Ridge.”

By 2015, after several more trips to the reservation and following the second state of emergency because of youth suicide attempts, Bass began the years' long endeavor of documenting The Bears Project, living in his RV while creating the film.

“It was really disappointing to realize that this state of emergency wasn't front-page news across the country. I felt like this should be in everyone's hearts,” said Bass. “In 2015, I decided to devote my time to the project. I had already built a relationship with Tiny and Eileen, and I knew that they held a huge amount of respect from the community.”

Indian Country Today, on March 10, 2021, announced the premier of a mini-documentary film, executive-produced by Sonny SkyHawk, Sicangu Lakota, and directed by Noel Bass, at the Big Sky Film Festival in Montana.

Bass said, “The Bear Program is Tiny's pride and joy. She would always tell me with excitement, 'You have to see my Bear kids! You're going to be amazed!' When I saw the Bears perform and witnessed the joy they brought to other kids, I knew this was the message we needed to share.”

The Bear Project sponsors many events and programs for the reservation and beyond:

Suicide Attempt- We travel to the location, making sure they are en-route to the hospital, or there’s emergency medical dispatched. We provide options for long term and in-treatment for the attempt survivor, along with counseling for suicide-loss/attempt survivors.

Suicide- Because we are so active in the community, we know our families and the youth very well. We provide different plans to help ease suffering. If a family is in extreme poverty, we will provide food and beverages for them in the time of need.

In all crises- We help to provide spiritual, emotional, and physical support to the immediate family, spouse/partner of the loved one. We always bring sweet grass and sage, as this is an important part of the Lakota culture, helping to ease anxiety. We work with Medicine people who accompany us at times, and they will sing a song to help with suffering.  We also pray with the family and/or spouse/partner. However, we are aware that some of our families may have different needs based on their religious beliefs or tradition, therefore we will act and pray accordingly.

The documentary outlines the spirit of resiliency on Pine Ridge and how it is a community that is finding ways and methods to remain strong and resilient. People on the reservation are concerned with their youth and want the issues that drive suicide addressed and resolved.

During the film, DeCory describes obstacles facing the youth, and the frustrations experienced by Tribal authorities and community members with such issues as the miles that must be traveled when facilitating an intervention. Problems such as extreme poverty, lack of resources, and few job opportunities plague reservation youth.

Bass describes his goal as “reaching the national level” and starting a discussion about the neglect of Native tribes to facilitate solutions to this this national tragedy.

About Us – The Bear Project. https://bearproject.net/aboutus/

​
“The Bears on Pine Ridge” Documentary – The Bear Project