student and climate activist traveled from her

home in Sweden to the United States on a

solar-powered yacht. She addressed the United

Nations during the climate action summit and

lambasted members for “stealing our dreams”

due to their lackluster response to fossil fuels' damage to the Earth's climate and environment.
Thunberg gained notoriety during her “School Strike for Climate” campaign, wherein she protested outside the Swedish Parliament every Friday instead of going to school. Her example has led to a groundswell of student climate activism around the world.

In September 2019, Greta met Lakota activist Tokata Iron Eyes during an event at George Washington University hosted by Amnesty International, where Greta was receiving an award. At that time, Iron Eyes, a fellow 16-year-old, invited her to visit her Lakota homelands.
Iron Eyes' father is Chase Iron Eyes, lead counsel for the Lakota People’s Law Project. In 2016, he ran unsuccessfully as a Democratic candidate for North Dakota's lone seat in the U.S. House.

On October 6, 2019, Thunberg did what was termed a “surprise” visit to Red Cloud Indian School on Pine Ridge Reservation. Even on such short notice, over 200 people came to see her and Iron Eyes. Basil Braveheart gave opening remarks, wherein he spoke of Greta's remarkable energy and presence, which he described as “Taku wakan skan,” or “something in sacred motion continues to move throughout the world.”

Thunberg was honored with the gift of a star quilt at Pine Ridge.

In Rapid City, South Dakota, on October 7, Thunberg and Iron Eyes led a march on the mayor's office along with several hundred participants, again protesting the continued use of fossil fuels. During the rally, Nick Tilsen, Lakota activist, urged the crowd to “Celebrate and lift up the voices of young people like Greta and Tokatawin who are leading this global movement around climate change and who are bringing a voice of the next generation,"
Thunberg and Iron Eyes visited Standing Rock Reservation on October 8 and spoke at the Standing Rock High School gym in Fort Yates, North Dakota, according to the Bismarck Tribune.

“The two will address (addressed) high-priority topics for the climate struggle in Indian Country, including plans to double the oil flowing through the Dakota Access pipeline and the proposed path of the Keystone XL pipeline adjacent to tribal nations,” the Lakota People's Law Project said in a statement. 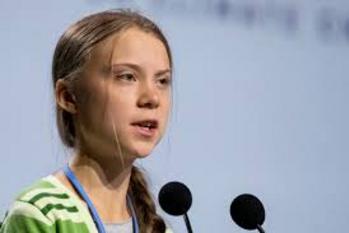