Every seed is awakened and so is all animal life.

It is through this mysterious power that we too

have our being and we therefore yield to our

animal neighbors the same right as ourselves,

The stars in the sky seem to revolve around the North Star, also called Polaris, during the night. The sky appears to change as the night moves on, but it also changes throughout the year. The two constellations of Bootes and Corona Borealis seem to sink so low in the night sky that they disappear below the horizon and are not seen for several months of the year. At the same time, the Big Dipper is visible all year long but looks like it is standing upright during some months and upside down in others. Stars don’t really move, but they appear to because the earth spins on its axis. The Micmac Indians of Nova Scotia told a story to fit the changing look of the starry sky.

Far away in the sky country, a bear woke up from a long winter sleep. She left her rocky den on the hill and lumbered off to search for berries. A sharp-eyed chickadee, flitting around the bushes, saw the bear and flew off to call his friends around him.
“It has been a long winter and I am hungry,” said Chickadee. “I am going bear hunting. Who will come with me?”
Six of his friends agreed to join Chickadee, and at once they set out to find the bear.

Chickadee was the smallest hunter, but he was also the wisest. He carried along a pot for boiling his dinner. Robin, who was larger, was called upon to lead the hunting party. Moose-bird was impatient and took his place behind Chickadee. He intended to help himself to Chickadee’s pot. Pigeon, Blue Jay, Horned Owl and Saw-whet all fell into place behind Moose-bird as the party started out.

Since food had been scarce through the winter, the hunters hurried to track their dinner. They found, though, that large and awkward as she seemed, Bear could move quite fast. The hunters were not catching up with her.

All summer the bear moved across the land of the stars while the hungry hunters followed. As autumn approached, some of them grew too weary to continue.

“I’m too far behind to catch up,” said Saw-whet at the very end of the line. He was a clumsy owl and heavier than the others. Saw-whet dropped out of the chase first.

“Where’s that lazy Saw-whet?” fretted Horned Owl, and he left to find his cousin.

Blue Jay tried to stay in the hunt, but by-and-by he and Pigeon lost their way and fell out of sight. That left only Robin, Chickadee with his pot, and Moose-bird to follow the trail of the bear.

At last, deep into autumn, the hunters overtook their prey. The cornered bear reared up on her hind legs and tried to defend herself. Growling and clawing she stood, but Robin shot her with his arrow. The bear fell over on her back, her blood coloring the leaves of autumn and staining Robin’s breast a brilliant red.

All during the winter the dead bear lay on her back in the sky country. But that was not the end of the story. Her life spirit had entered another bear who had found its way to the den and was fast asleep. When spring awakens the sleeping earth, the den will reappear. A new star bear will come out of the den to search for berries in the sky, and Chickadee will begin the hunt again, as he does every year.

Every part of this soil is sacred - Squamish.

To us the ashes of our ancestors are sacred and their resting place is hallowed ground … Our dead never forget this beautiful world that gave them being. They still love its verdant valleys, its murmuring rivers, its magnificent mountains, sequestered vales and verdant lined lakes and bays …

Every part of this soil is sacred in the estimation of my people. Every hillside, every valley, every plain and grove, has been hallowed by some sad or happy event in days long vanished. Even the rocks, which seem to be dumb and dead as the swelter in the sun along the silent shore, thrill with memories of stirring events connected with the lives of my people, and the very dust upon which you now stand responds more lovingly to their footsteps than yours, because it is rich with the blood of our ancestors, and our bare feet are conscious of the sympathetic touch.

It matters little where we pass the remnant of our days. They will not be many … Sad-voiced winds moan in the distance … A few more moons, a few more winters, and not one of the descendants of the mighty hosts that once moved over this broad land or lived in happy homes, protected by the Great Spirit, will remain to mourn over the graves of a people once more powerful and hopeful than yours.

But why should I mourn at the untimely fate of my people? Tribe follows tribe, and nation follows nation, like the waves of the sea. It is the order of nature, and regret is useless. Your time of decay may be distant, but it will surely come, for even the White Man … cannot be exempt from the common destiny. We may be brothers after all. We will see.

Seealth, Chief of the Squamish, 1854, as reported by Henry Smith in the Seattle Sunday Star, 1887.

Kinship with all creatures of the earth, sky and water was a real and active principle - Lakota.

The Lakota was a true naturist - a lover of nature. He loved the earth and all things of the earth, the attachment growing with age. The old people came literally to love the soil and they sat or reclined on the ground with a feeling of being close to a mothering power. It was good for the skin to touch the earth and the old people liked to remove their moccasins and walk with bare feet on the sacred earth. Their tepees were built upon the earth and their altars were made of earth, and it was the final abiding place of all things that lived and grew. The soil was soothing, strengthening, cleansing and healing.

That is why the old Indian still sits upon the earth instead of propping himself up and away from its life-giving forces. For him, to sit or lie upon the ground is to be able to think more deeply and to feel more keenly; he can see more clearly into the mysteries of life and come closer in kinship to other lives about him.

Kinship with all creatures of the earth, sky and water was a real and active principle. For the animal and bird world there existed a brotherly feeling that kept the Lakotas safe among them and so close did some of the Lakotas come to their feathered and furred friends that in true brotherhood they spoke a common tongue.

The old Lakota was wise. He knew that man's heart away from nature becomes hard; he knew that lack of respect for growing, living things soon led to lack of respect for humans, too. So he kept his youth close to its softening influence.
In the Indian the spirit of the land is vested; it will be until other men are able to divine and meet its rhythm. Men must be born and reborn to belong. Their bodies must be formed of the dust of their forefathers' bones.

[The Indian] was kin to all living things and he gave to all creatures equal rights with himself. Everything of earth was loved and reverenced.

As yet I know of no species that was exterminated until the coming of the white man … The white man considered animal life just as he did the natural man life upon this continent as "pests." There is no word in the Lakota vocabulary with the English meaning of this word … Forests were mown down, the buffalo exterminated, the beaver driven to extinction and his wonderfully constructed dams dynamited … and the very birds of the air silenced … The white man has come to be the symbol of extinction for all things natural in this continent. Between him and the animal there is no rapport and they have learned to flee from his approach, for they cannot live on the same ground. 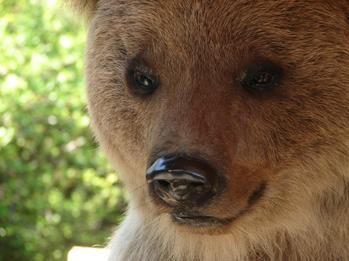