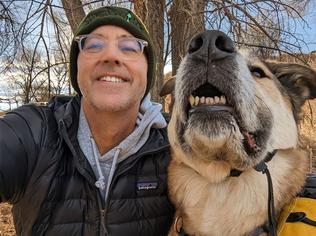 Tom Whillock: A Man for All Seasons
~ Mary Burrows

Tom Whillock is a Sixties baby, born in Milwaukee.

He spent some of his formative years on the

Cheyenne River Reservation where his father

was assigned as a dentist. His earliest

memories of Native American culture are from

parts fascination and overwhelm [when] hearing

the drums and singing for the first few times.”

After high school graduation, Whillock toured for a year with Up With People, “singing, dancing, and spreading peace and understanding with around 100 other young people from some 30 countries.” He learned to play the guitar from fellow cast members and began writing and performing his own songs. It was also during this time that he was involved in community service projects. “It made me aware of the significant disparities in wealth and resources. I resolved to do my best to contribute to easing these disparities when I got 'off the road' again.”

Whillock started college in 1984 and formed his first band along with his best friend from high school. The band made recordings and played at bars, colleges, and festivals. When disappointments crossed their muscial path, he got 'off the road,' and he and his wife moved to Flagstaff, Arizona. They wrote and perfomed together in the coffee house scene. In 1992, the couple moved to the Black Hills to be near the grandparents of the baby they were expecting.

He continued his musical pursuits, and, inspired by drum circles at Grateful Dead shows and the drumming at powwows, began to learn to play various hand drums in the late 1980s. “This evolved into the Black Hills Drum Project,” Whillock said, “which has been jamming and performing around the Hills since 2004.” The muscial husband-and-wife duo evolved into the band “Toadstool Jamboree,” which performed and recorded from 1994-2003. After a three-year hiatus and new songs in the hopper, he formed his second band, “Groovedaddy,” which played around the Black Hills during the period between 2006 and 2018. And for his day job, Whillock is the technician at Whillock Dental Arts, which specializes in dental implants.

Whillock attributes the beginnings of his love for music to the powwows he attended as a child. “Now you can find me at the Wacipis, going from drum group to drum group, listening and recording along with my Native neighbors.” He also cites his father's eclectic and expansive vinyl record collection as inspring his love of music.

He tells of sitting in a drum circle in 2010 at Ifrits Hooka Lounge in Rapid City and discovering a new instrument: the handpan or “Hang” drum. “As soon as I heard one, I knew I needed one in my life.” Due to the rarity of crafters of handpans in the world, Whillock waited three years to receive his first drum. He plays the “Hang” drum at various functions thoughout the Black Hills. (The sound is vaguely reminiscent of steel drums, only much more ethereal. MB)

In 2012, group of Whillock's friends started serving a monthly meal at the Cornerstone Rescue Mission in Rapid City. He assisted in the service, and also began attending meetings of various groups and organizations whose stated goals are “bridging the gap between Native and non-Native people and improving opportunities for Native people in the area.”

His volunteer work led him to meet Lloyd Big Crow. Together, they began serving neighborhood meals and providing toys and fun activities for the youth in the various neighborhoods of Rapid City. This expanded into the weekly Friday meals at the bandshell in Memorial Park along Rapid Creek, and the formation of the non-profit organization, Oyatekin Chantewastepi: People with Good Hearts. Big Crow has gone on to other endeavors, including mentoring youth, and establishing a weekly meal for the un-sheltered at Pine Ridge Village.

Whillock has assumed the planning and organization of the Friday meals, along with the assistance of a group of steadfast volunteers and donors. Each week, he asks for volunteers and donations on Facebook, and “somehow, miraculously, we've managed to provide a solid meal every Friday since Spring of 2019. Most of the people we serve are unhoused or under-housed people from the community, and around 95% of them are Native American. Seeing these neighbors struggling every week has shown me on an even deeper level how much work we have to do to bridge the opportunity gap between Native and non-Native individuals, in this area and, really, around the world.”

Deb Daly, a loyal volunteer and member of Oyatekin has been assisting with various feeds and activities since 2010.”Serving, to me, is giving back,” she said, “whether to our students and their families, or our houseless relatives...Elders, veterans, and families are hurting, especially right now. If we can make their day a little brighter and fill their tummies with good food, it's definitely a win-win.”

Whillock speaks of reading the Holy Bible from cover to cover. “It's a very strange book, and it freaked me out more than I cared to admit at the time, mostly because I was taught it was so authoritative.” He was particularly impressed by “the Jesus character.” He was frankly scared, knowing he could not live up to Jesus' challenging words. “The notion of radical compassion is what stuck with me most.”

He describes himself as a pan-spiritual, incorporating elements from everything that resonates with his soul and co-mingling them with his sense of compassion and human decency.

“Through all my studies and explorations, my interest in spirituality intersected with my interest in learning about our local indigenous culture and spirituality. I read every book I could find on Lakota history, culture, and spirituality and have tried to learn as much as I can through personal interacton with local Lakota people. I started sitting in sweat lodge ceremonies---Inipi---around 1990, and continue to attend whenever possible. I resonate deeply with Lakota, and all Native American, spirituality, and find so much about Lakota culture and people to be interesing, beautiful, and seriously funny.

“And yet, the generational and individual trauma is so pervasive, it makes it very challenging to help people help themselves as much as I'd hoped. Progress is far too slow for my satisfaction.”