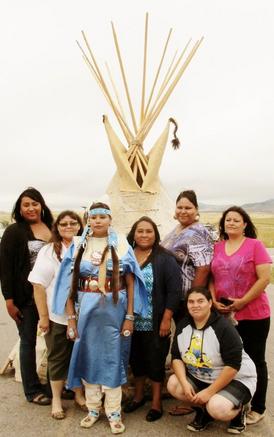 in creating a Bison-hide tipi under the

The seven women were TeeJay Littlewolf,

Prior to that, the last traditional tipis were constructed at the end of the great Bison herds and the beginning of reservation life, some 135 years in the past.

During his tenure as curator of the Wounded Knee Museum, Belitz was able to study a few remaining Bison-hide tipis. This study led him to the place where he “instructs and demonstrates skills of the pre-reservation era,” through his entity Sioux Replications, located at the ranch in Fall River County, South Dakota. Such skills and arts as quillwork (porcupine), lazy-stitch beadwork, bow-making, parfleche (rawhide) work, and tanning of hides for the construction of tipis are taught by Belitz. He is author of the book “Brain Tanning the Sioux Way.”

Larry Belitz has restored the age-old skills of hide tanning, along with sinew-sewing and constructing hide tipis, not only to Northern Cheyenne, but to Kiowa and Arapaho as well.

All tools used during processing of hides are of the original materials utilized in traditional tipi construction. A fresh Bison hide is sinew-laced to a frame and scraped free of bits of meat and fat with leg-bone fleshers from the animal itself. After the hide has dried, Bison hair (known as wool) is stripped from the rawhide with elk horn scrapers.

To soften the hide, it is soaked in water so the brains of the animal can be rubbed into it. Supposedly, every mammal has enough brain to tan its own hide. The hide is then returned to the frame and pushed and staked down to stretch the skin into softness while it dries. This part of preparation can take many hours.

A final method of stretching is a game of using the newly-softened hides to toss children into the air, trampoline-like, combining fun and utility!

Five additional tanned hides were provided for the tipi by Belitz. Construction begins with poking holes in the hides' edges with an awl and then sinew-sewing them together. This step alone takes about three days. The book Buffalo Hide Tipi of the Sioux, describes the tent pole erection and placing of hide tipi covers.

The century-old dream of the Northern Cheyenne to complete a Bison-hide tipi was manifested on August 21, 2014, when the seven women erected the tipi they had helped to complete.

During the dedication, seven military veterans walked across the tipi cover barefoot to bless it, and an honoring song was sung. Elders spoke of the importance of the tipi. The women set up the lodge poles and placed the cover while Alan Blackwolf, Keeper of the Northern Cheyenne Sacred Buffalo Hat, smudged the tipi. The people joined hands, prayers were offered, and a circle dance to celebrate Friendship ensued.

“The mission of Sioux Replications is to show and document its artifacts from the Buffalo Days in the Lakota Cultural Museum so the story and romance of the old days will not be forgotten.”

Replicas of the Horn Chips collection of Crazy Horse Medicines (including protective stones the warrior wore behind his ear) are in the Lakota Cultural Museum on the Belitz ranch. The original medicines were entrusted by Lakota elders to the Indian Museum of North America at Crazy Horse Memorial, where they are secured in temperature-controlled vaults.

During their expedition, Lewis and Clark stayed one winter in a Mandan village and received gifts from the Plains tribe. Lewis and Clark: Gifts of the Mandan is a traveling museum that features Sioux Replications' commissioned authentic replicas of those artifacts, created to celebrate the bicentennial of when, around 1805, the 13 originals were sent to then-president Thomas Jefferson. The artifacts are currently on display in the entryway of Monticello, Jefferson's home.

Belitz has constructed upward of 65 hide tipis during his career, in addition to all the other replications he has created. He is also an educator, having taught Lakota educators courses in Indian Culture and History at the University of South Dakota, in addition to his 17 years as a middle school teacher in Hot Springs.

He is the 2021 winner of the South Dakota Governor's Individual History Award, presented at the State Historical Society Conference in June in Pierre, for “demonstrating outstanding dedication and commitment to excellence in Promotion, Collection, Preservation, and Interpretation of South Dakota History.

Belitz' credentials include serving as Indian Technical and Historical Advisor for 12 movies, the first of which was Dances With Wolves, where he made hero props for Kevin Costner, and including Hidalgo and two about Crazy Horse. He has also produced, and provided historical items for several documentaries, including a German film: 500 Years of the American Indian, and People of the Plains.

What You Didn't Learn in High School: Larry Belitz (rogerhowell.blogspot.com)