“Long before there was a United States of America,

tribes governed themselves, provided for their people,

and negotiated treaties with other nations such as

treaties with the U.S., they were guaranteed the right

to continue governing themselves. This means that

their sovereign rights are retained, not granted. “ (1)

Indigenous people have lived in the Americas (so called by Europeans that took the lands) for centuries. This land, the traditions, the history, the stories, and the ability to form their own governance and self-determination, was in place long before European invaders came and began taking the land for themselves. As the lands were taken, and Europeans pushed further west, tribes increasingly faced the devastating impact of this expansion: loss of land, loss of life, disease, loss of food sources. The colonizers employed genocidal practices when tribes fought for their homelands and their way of life. The devastation was enormous. And as if taking the land by force and theft wasn't enough, the invaders sought to take cultural identity away, to deny the right to tribal tradtional practices, forced tribes onto reservations on lands that were less desirable, offered bounties on the scalps of, not only men, but women, children, babies and elders. Children and babies were stolen from their families and placed in residential schools to obliterate their tribal identity. And so many more devastating actions taken against the people to which the homelands belong. Some of these abhorent practices continued into very recent times. For some tribes, even the right to practice sovereignty has been denied.

What is tribal sovereignty

As the colonizers thrust themselves onto occupied lands, they asserted soverignty over tribes claiming divine right, as was common in European colonization practice. Eventually, in addition to taking the land by force, other efforts were made to acquire lands. The government began engaging in negotiations with tribes and entered into many treaties, many of which were never honored. Simply stating a complex issue, tribal sovereignty status and legal decisions were made.

“Tribal sovereignty refers to the right of American Indians and Alaska Natives to govern themselves. The U.S. Constitution recognizes Indian tribes as distinct governments and they have, with a few exceptions, the same powers as federal and state governments to regulate their internal affairs. Sovereignty for tribes includes the right to establish their own form of government, determine membership requirements, enact legislation and establish law enforcement and court systems.” (2)

But in Wabanaki country, sovereignty is not recognized. A 1980s settlement act has resulted in harms to the tribes and their waterways and ability to self-determination, as well as differing interpretaions of the settlements intent. Today, the Wabanaki and allies are seeking a redress of that act and a restoration of their sovereign rights as aligned with a constitutional recognition of sovereignty in federal law and in line with other states.

“...the State of Maine has interpreted that act differently than the tribes. This has led to many conflicts-often legal-and has harmed the tribes and cost Maine taxpayers unnecessary legal costs for 40 years.” (3)

It is not only the right thing to recognize and restore the sovereignty of a people who lived in and stewarded this land long before colonization, but is imperative to the well being of the waterways and environmental concerns as the climate increasingly faces degradation due to the practices of resource exploitation that resulted from that colonization.

“In just a few hundred years since the Wabanaki tribes welcomed European settlers to these shores, the Wabanaki have lost 98% of their population, access to most land and waters, their ability to sustain themselves in traditional ways, and so much more. Recognizing the Wabanaki tribes’ inherent sovereignty is a first step to recognizing and beginning to heal the deep suffering that European settlers and the State of Maine have inflicted. At a time when climate change and environmental degradation are accelerating at terrifying rates due to Western ways of living, restoring the Wabanaki tribes’ ability to manage tribal lands, waters, and resources will help protect all children and future generations. “ (3)

The time is now. Sovereignty for Maine's Wabanaki is imperative. And most importantly, it is the right thing to do. 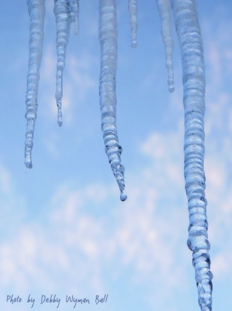 Music comes from an icicle as it melts, to live again as water.