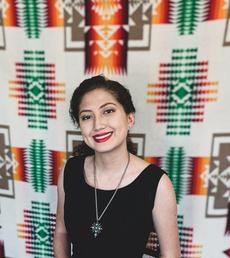 
What is the greatest contribution Native culture

can give as a gift to the global community?

Native culture is rich and full of life. There are

so many different Native tribes and peoples

Interconnectedness is essential to every Native culture and having the larger community recognize this ideology than many of the world’s problems can be solved. Interconnectedness is defined as being connected with each other. Native culture sees it as a person being connected with everything, the world, language, ceremony, and nature. It also sees it as having everything connected with each other. This ideology causes people to think about their actions. Their actions will not just affect themselves but everything around them. It creates a culture that wants the best for the group and not just an individual. A culture that is focused not on themselves but on others also focuses on having enough for everyone. Having enough for everyone means enough for future generations, animals, plants, and everything else that needs the resource to survive. It requires people to think responsibly about what they are doing. Believing that everything is connected means knowing that actions have consequences that may or may not affect the person but it is up to them to mitigate the negative impact they may have on others.

In Western society, the ideology is that everyone is on their own path and working towards their own goal. This can lead to a lot of disconnect about what is happening in the world. When people start to think of only themselves people start to get hurt. There is no longer Rebekah McNiel, WINDS Scholarship cooperation because individuals are only thinking about how they will succeed and not how everyone will succeed. When individuals are focused on themselves they also take for granted nature and the resources it offers. People will start taking and taking without any thought about who else needs the resources. The focus will only be on how it is benefitting them.

For the world to become less focused on the individual it needs to learn the importance of interconnectedness. Native culture has thrived off of this ideology for hundreds of years and has helped maintain the spirits of Native peoples. Once the rest of the world learns this way of living, the world will become a community. A community contains people who want to help each other because they know their struggles are the same as theirs. A community wants everyone to succeed and benefit from collective action. A community strives for positive change. Learning that everyone and everything is connected helps people to empathize with each other and solve problems. It also allows people to appreciate the world around them. Knowing that the actions of one affect many will make people think more about what they are doing. They will realize that what the earth does for them is a gift and they need to reciprocate it. It is not a one-way deal. It is a continuing cycle of giving and receiving.

Native culture is not a thing of the past. It is a belief system that stands through time and has helped people throughout history. Native culture can continue to help people in the present and the future. For this to happen the global community needs to learn from Native cultures about interconnectedness. Once this is accomplished world will become connected with everything around it. For interconnectedness to be effective people need to learn how everything relates to them and that their actions affect more people than they initially thought. Native teachings can help others navigate the intricacies of interconnectedness and lead the world in a positive direction.