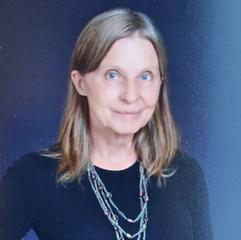 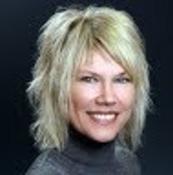 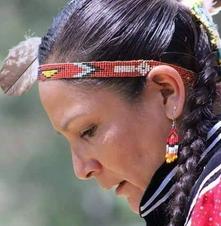 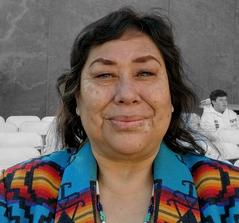 WNT is delighted to welcome the following people to our Board of Directors. For a complete listing of the board members:  https://www.whispernthunder.org/about-us.html

I was born in Yankton, South Dakota. Yankton

was the biggest town closest to my hometown

in Nebraska about 20 minutes away and I spent

a lot of time there until I left high school. I came

to realize quite soon in my life about the Native

American presence around me and even in my

and felt a brokenness in my soul that tugged at me. I was intrigued by all of the reservations in South Dakota as there are more than 15, mainly Sioux. I found in those areas where I grew up, where there was little exposure to other colors and cultures, white ruled and anything else didn't fit in. That was the beginning of my long interest in equal rights for Native Americans. I moved to LA in the 80's and along the way, befriended a screenwriter and she told me about Leonard Peltier. I immediately got involved and at that time, I was able to speak with Leonard countless times by phone. I wrote a song for him called "Crime that isn't Mine" and my screenwriter friend was able to go to Leavenworth at the time, meet with him and played the song for him. He loved it and couldn't understand how I could grasp what I did but he wanted that song to be heard. I contributed that song to a compilation of songs they were putting together for Leonard for both exposure and donations (then recorded on cassette tape). Through Leonard's reaching out to his friends about me, I attended several events for Leonard and performed at a couple of benefits for him, alongside the late Floyd Red Crow Westerman, John Trudell and Buffy St. Marie. I learned a lot from them as to their own lives and the lives around them, their people.

I met Billie Fidlin in Phoenix at Leonard's insistence in 2005 and welcomed the connection. Since then, I have fully supported her as a person and friend, as the founder of WNT, and as a visionary for whatever future she wishes to create.

Julie is a full-time realtor in the Metro Phoenix area and the Los Angeles area and as such for nearly 14 years. Prior to becoming a realtor, she was a legal secretary in Century City, California for many years. “Now just as then, my takeaway is that we are all people and there is a heartstring in every one us who longs to resonate with a greater purpose.”

as an Explosive Ordnance Disposal Specialist

in the United States Air Force, Luke AFB in

Arizona. Later she served as a Logistics Plans

Manager at the Davis-Monthan AFB, in Arizona.

Once her service concluded, Mellody held

In the mid-2000s she was a visiting instructor of

economics, business and mathematics. She retired as Director of The R.O.S.E. Center in Sweet Briar, VA in 2009. Mellody is married with adult children.

Ms. Gotwalt has been a long time author and supporter of Whisper n Thunder. She is adept at organizing and marketing.  Like so many, her native heritage has been somewhat difficult to trace. From her family members she was taught in the traditions and the art of stories.

“However, if one follows the tradition of matriarchal membership, then from research I suppose I should say I am Lenape, but I did not know that line very well growing up. I am simply a very blended person…I envy the pure or near pure bloods who know for sure their affiliations, but still I can treasure that which I have received from my youth from each ancestor both native and immigrant.”

Gail Paul is a Dakota woman living in Woodstock,

New Brunswick Canada, in the unceded territory of

the Wulastok people. She was Whisper n Thunder’s

keynote speaker at the 2019 Gathering of Voices

event, held in Phoenix, Arizona. Gail is an outspoken

advocate on behalf of missing and murdered

Indigenous women and girls. She grew up in

Saskatchewan, Canada, spending her childhood in and out of foster care. She now lives with her husband and has four children.

Professionally Gail is a registered nurse. She is a Non-Violent Crisis Instructor and the Community Jurisdiction coordinator for Woodstock First Nation Child and Family Services. Gail is the past interim President of NWAC. She is also a strong advocate on behalf of the LGBTQIA community.

“Our warriors (need) to step up. Put away the alcohol, the opiates. Understand your history and herstory. The real one, not the colonized version. I personally believe and many agree, the education system had a big role to play. Above all, respect the women. We have the connection to our first mother. We give life, we hold sacred.

Mrs. Walker resides in Tempe with her husband

and daughter and has been an Arizona resident

for 25 years. Rosetta is a community volunteer,

advocate and influencer in the Native American

community. As a recipient of the 2016 Phoenix

is widely recognized as an activist with emphasis on

education and supporter in the Native American arts community.

Rosetta is a volunteer with the Maricopa County Elections Department Community Relations Team assisting with voter registration and community outreach. She is a member of the Voices of Indigenous Voters group under the Morning Star Leaders LLC. This responsibility includes Facebook live events, public speaking and outreach to Arizona tribes of the importance and impact of the Native American vote.

Most recently she was a steadfast advocate at the Arizona Legislature during the hearings for House Bill 2570 Missing and Murdered Indigenous Women and Girls Study Committee. She attended House and Senate hearings and was present for the signing of the bill into law by Governor Doug Ducey in May of 2019.

Whisper n Thunder is honored to have these amazing individually with us!